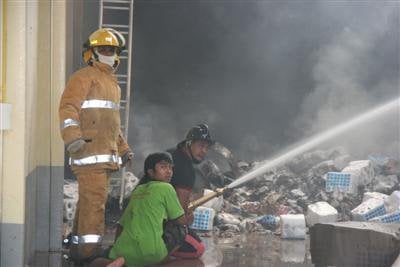 CHALONG: It took firefighters about an hour-and-a-half to extinguish a blaze that broke out in a warehouse on Soi Sanjaotaead in Chalong at about 11:30 am today.

Four firetrucks and a cherry-picker were dispatched from the Wichit and Chalong Fire Departments to the warehouse, located in a residential area off Soi Taiad, about 200 meters behind the Phuket Spa and the grounds of The Andaman Cobra Show.

It was a back-and-forth battle with the fire. Fueled by the highly combustible paper and its plastic wrapping, the fired roared back to life several times after firefighters seemed to be getting it under control.

One firefighter in the bucket of the cherry picker used a steel rod to punch holes in the corrugated tin cladding of the warehouse so that water from the canon could reach the flames.

Firefighters continued to douse the unburned merchandise to keep it from igniting, and raced under very dangerous conditions to get as much toilet paper out of the warehouse as quickly as possible to stop it from going up in flames.

One man high up in the rafters, dressed only in underwear, bravely scooped whatever paper he could get his hands on from the clutches of the blaze just meters away. One good puff of wind making its way inside the warehouse could have fueled the fire and left him with terrible burns.

Although the blaze left the area engulfed in thick smoke, there were no reports of serious injury.

It is still too early to estimate the damage caused by the fire.

One firefighter said he suspected the cause was an electrical short circuit.

Kathu man confesses to grisly murder of neighbor while drunk