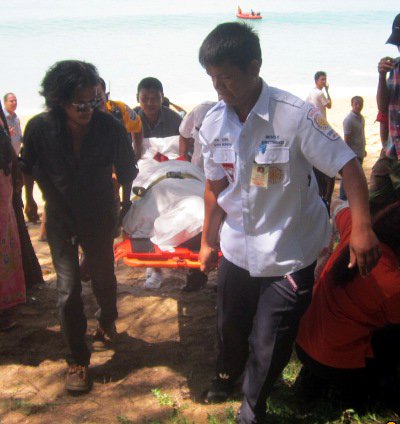 PHUKET: A 2-and-a-half-year-old boy and his grandfather drowned at Mai Khao Beach in Thalang, in the north of Phuket, this morning during a walk along the beach.

Sem Meesak, 57, dropped his wife off at work at a nearby resort at about 9am, then took his grandson, Anachin Meesak, to Pru Jeh San Lake for a walk, Tah Chat Chai Police duty officer Santi Prakobpran told the Phuket Gazette.

“The lake is very close to the surf, and the boy ran off to play in the sea. Mr Sem could not keep up because he had an injured knee and the boy was swept away by the surf,” Capt Santi said.

“Mr Sem tried to grab the boy, but he too was overpowered by the strong waves,” he explained.

The bodies were taken to Thalang Hospital, where doctors pronounced the cause of death as drowning, Capt Santi added.