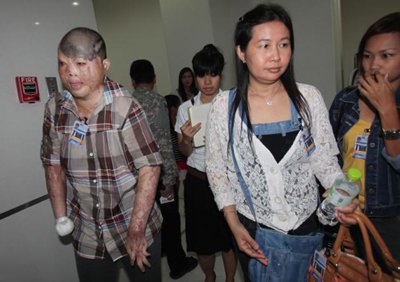 On September 14, then-DNP chief Damrong ordered that the admission fees to many national parks be increased in order to boost income so the DNP could upgrade the parks in line with national standards.

The 29 national parks include Mu Koh Angthong in Surat Thani, Mu Koh Similan in Phang Nga visited by many during their stays in Phuket, Suthep-Pui in Chiang Mai, Phu Hin Rong Kla in Phitsanulok, Pha Taem in Ubon Ratchathani and Kaeng Krachan in Phetchaburi.

Damrong had to go into mandatory retirement at the end of September.

Meanwhile, an official at the Natural Resources and Environment Ministry said Rerngchai’s decision would hurt plans to upgrade facilities at national parks.

“The increase in admission fees, after all, had been applied to big national parks only,” the official said.

However, Rerngchai said the reduced admission fees would attract more visitors to the parks and reduce the risk of vendors in the area losing business.

Meanwhile, an informed source said DNP was planning to collect fees via Counter Services from January 1 in order to prevent corruption on the part of ticket collectors stationed at the entrance of national parks.

In a related development, Tak Governor Suriya Prasartbundit said the road to the Ti Lor Su Waterfall was now open after a five-month closure for maintenance.

“Please use pick-up trucks instead of for four-wheeled drive vehicles,” he said.

This amount is equivalent to 20 per cent of what the court believes the plaintiffs should get for the damages they suffered in the blaze.

The Santika fire, which broke out in the early hours of January 1, 2009, killed 67 people and left more than 100 others seriously injured. The parents of some victims lodged a complaint against the BMA on December 28, 2009, on grounds that the city had failed to strictly enforce building regulations and fire codes. According to them, the tragedy could have been avoided if regulations had been strictly enforced.

The lack of enough fire exits was cited as one of the reasons why many revelers were unable to get out of the nightclub, which caught fire due to a fireworks display.

The compensation amount for each of the 12 plaintiffs ranges between 68,000 and 740,000 baht, and will be subject to an interest rate of 7.5 per cent, calculated from the day the court order was issued to the day the payments are made.

No BMA representative was present in the courtroom yesterday. Deputy Bangkok Governor Malinee Sukvejvorakij said BMA will file an appeal in line with normal legal procedures. “We understand the victims’ losses and really want to help. However, at this point, we need to proceed in line with legal procedures. Without an appeal, the BMA might face a probe by the Office of the Auditor-General,” she explained.

She added that the BMA would only pay if the Supreme Administrative Court rules that it do so.

Chairat Saeng-arun, a lawyer for the plaintiffs, said the court had instructed the BMA to pay the compensation within 30 days. “This is separate from the civil case filed by the victims and their relatives,” Chairat said.

The BMA was ordered to shoulder 20 per cent of the compensation because there were many parties found responsible, among them the owner, Wisuk Setsawat.

Malee Thanompanyarak, whose sister died in the fire, said yesterday that Wisuk had initially offered 50,000 baht in compensation but had paid only 40,000 baht . “He has never contacted us again,” she said.

Last year, the Bangkok Southern Criminal Court sentenced Wisuk to three years in jail for negligence. The court ruled that Wisuk had failed to obey building regulations and to provide safety equipment and emergency exits at his Ekamai nightclub. The court also found him guilty of allowing minors to enter the site. Wisuk is free on bail pending his appeal of the ruling.

Myanmar opium output rises despite eradication effort
Reuters
PHUKET: Opium poppy cultivation in Myanmar has risen for the sixth consecutive year despite a state eradication campaign, a United Nations report said yesterday, throwing doubt on government assertions the problem would be over by 2014.

Unprecedented eradication efforts managed to destroy almost 24,000 hectares (59,280 acres) of poppy fields in the 2012 season, running from the autumn 2011 to early summer this year, more than triple the previous year’s total.

But the U.N. Office on Drugs and Crime (UNODC) said land used for cultivation in Myanmar, the world’s second top producer of opium after Afghanistan, still increased 17 percent to its highest level in eight years.

Myanmar is forecast to produce 690 tonnes of opium in 2011/12 according to the report, up from 610 tonnes – about 10 percent of the world’s opium – the previous year, the UNODC said. Afghanistan produces around 90 percent.

Land in the Burmese part of the Golden Triangle – a lawless region of Myanmar, Thailand and Laos home to vast drug trafficking operations – is scarce and many poor farmers opt to use it for poppies, which earn them 19 times more per hectare than rice, according to the UNODC report.

Four out of every ten households surveyed in poppy-growing villages grew the crop themselves, but other households participated in the cultivation and harvesting, making it vital to the economies of whole communities.

“There is no question that there is a strong connection between the conflicts in the country and the most immediate sources of revenue to purchase weapons, and in many instances this is both opium and heroin and methamphetamine pills,” Lewis told Reuters.

“The areas of highest cultivation intensity are also the areas of ongoing or suspended conflict. The emergence of peace and security is therefore an essential ingredient in tackling the poppy problem.”

The government of President Thein Sein, in power since March 2011, has reached ceasefire agreements with many of the ethnic minority rebel groups that had fought central government for decades, but full resolution of the conflicts is some way off.

Sit Aye, legal adviser to Thein Sein, told Reuters in February that the government wanted to wipe out the opium problem by 2014.