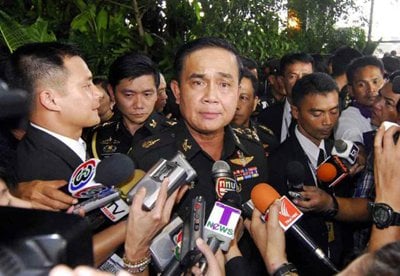 On Friday, Prayuth had a legal officer, Colonel Sayun Khunkhajee, file the complaint with the Lumpini police station in Bangkok. Pol Captain Bodin Khampui received the complaint filed against Amsterdam and an unidentified woman, who translated his speech during a red-shirt rally on May 19.

Sayun also handed over a CD with a video clip of Amsterdam’s speech.

In the speech, Amsterdam alleged the Thai Army committed brutality against the red-shirt people, using snipers. He also alleged the Army tried to frighten the red-shirts so that they could not campaign for their rights.

“Two years ago, I was here and I witnessed the brutality of the Thai Army,” Amsterdam said in the speech.

“But I want to tell you something. They are using American guns. We must tell the American government to stop training Thai snipers. Because of America, those snipers are [aiming] at us.

I have also one question for the Thai Army. “Who is attacking Thailand? Why is the Army so scared? [Why] do they make us so frightened? The truth is that the Army wants us frightened so that we don’t have the time to think about our own rights.”

Pol Maj-General Anuchai Lekbamrung, deputy metropolitan police commissioner, said Metropolitan Police Division 5 has set up a team of investigators to be in charge of the case.

Anuchai said the team would be fair to both Amsterdam and the Army.

Learning of the complaint, Amsterdam announced on his Twitter page that he would inform the International Court of Justice (ICC) of the Army chief’s move.

“News that the Thai Army and General Prayuth have filed criminal charges against me will be on the ICC’s desk on Monday morning,” his twitter message reads.

Amsterdam also posted a Thai-language statement about his reaction to the Army’s complaint.

He said in the statement the legal move showed that the Army and former prime minister Abhisit Vejjajiva were desperate because of legal action against them, so they were trying to use scare tactics to cover-up their alleged wrongdoings.

In the statement, Amsterdam stood by his speech made on May 19, the second anniversary of the crackdown on the red-shirt protesters at the Rajprasong Intersection.

Amsterdam said in the statement that he would continue to work with determination to bring senior leaders to justice on charges of crimes against humanity related to the crackdowns.

In another development, the Prachatai.com website has published a document it claimed to be an order from the Center for the Resolution of the Emergency Situation. The document purportedly stated that troops and police at security checkpoints could request backup from snipers in case they spotted armed men among the demonstrators.