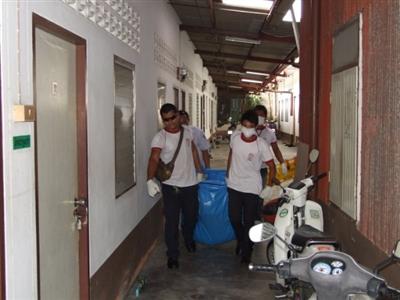 PHUKET: A 43-year-old man was found murdered in an apartment in Phuket Town yesterday afternoon.

Police believe Pirasak Pongchoo, from Phatthalung, may have been killed in anger by his male partner for sleeping with another man.

Mr Pirasak’s body was found wrapped in bedsheets in the toilet of his rented room on Wichit Songkram Road Soi 1 around 2:30pm.

His throat had been slit. There was blood on the floor next to the bed and a bloodstained knife on the floor beside a beer bottle.

Apart from this there were no other indications that a violent struggle had taken place there.

Police estimated the time of death at about five days earlier.

An investigation revealed Mr Pirasak had been renting the room since April 4.

Witnesses told police that young men often came to drink with him in his room.

A group of men were seen entering and leaving his room the week before he died. Mr Peersak had not been seen alive since that time.

Police suspect Mr Pirasak may have been murdered by his casual sex partner (“gik“) and friends after he slept with another man.

Police are seeking to question Mr Pirasak’s partner and the other men in order to bring his killer or killers to justice.