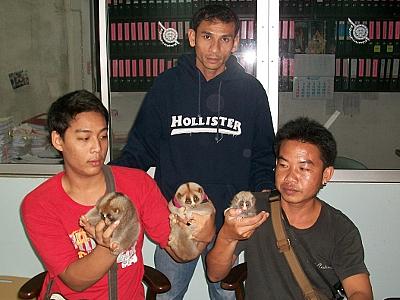 PHUKET: Law enforcement officers on Saturday night arrested two men for illegal possession of three slow lorises, which they were using as props to entice Phuket tourists to pay to have photographs taken with them.

The officers, led by Sub Lt Jedsada Lugieng of the Natural Resources and Environmental Crime Suppression Division (NED), moved in to make the arrest after spotting the men on Bangla Road at about 8:30pm.

“We received a report about baby slow lorises being used in Patong. The operators use them to get tourists’ attention. They let them touch the animals and then have their photos taken with them. We investigated the complaint and found the two suspects, so we arrested them,” he said.

He identified the pair as: Nuttapol Kensing, 20; and Suchai Charoenphu, 30.

Both men were charged at Patong Police Station with illegal possession of protected species.

Seized as evidence in the case were the three lorises, ranging in age from four months to seven months, as well as a Polaroid camera.

“The three slow lorises will be transferred to Awat Nitikul, chief of the Environmental Conservation Unit based at the Khao Phra Thaew wildlife sanctuary in Thalang,” he said.