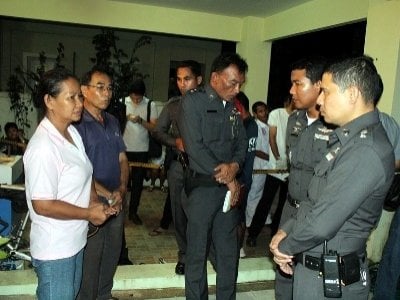 PHUKET: Chalong Police investigating the murder of a 17-year-old girl in her home yesterday suspect the attack was carried out by a neighbor who knew she was there alone.

The police were notified at about 5:30pm by relatives of the victim, 17-year-old Sunisa “Som” Saiyoy, who was found lying face-down on a bed in the family’s detached home in a housing estate off Nakok Road in Chalong.

Som was wearing a green sarong, black bra and white t-shirt, which appeared to have been pulled up by her attacker. An initial examination led police to list the apparent cause of death as strangulation, though a bloodstained hammer was discovered on the bed next to her.

There were signs of forced entry to the aluminum window of her bedroom, one of three in the single-storey home, which was fully enclosed by a gated wall.

On the floor of the home, police found more bloodstains and a pair of red shorts.

Khaneung Saiyoy, the 61-year-old father of the deceased, told the Phuket Gazette that his daughter was home alone that day because she had taken a term off from school due to anxiety and chronic headaches.

Som had been joining her parents at work, selling fruit at Vocational College in Phuket Town. However, yesterday morning she had complained of a headache and asked to stay home and sleep.

Mr Khaneung said he and his wife locked the home and front gate securely before leaving.

Later that day, a young relative went to deliver food to the ailing girl, but his calls to her went unanswered.

After opening the door and discovering Som on the bed, the cousin called Som’s parents and then notified the police.

Anong Intarasuk, Som’s mother, said that as she was leaving that day she did not suspect anything was amiss.

However, she told the Gazette that over the dinner table the night before, Som said to her: “Mother, please don’t die before me, because if you die before me I don’t know who I could live with.”

Som had shown signs of depression and spoke frequently of death since her 17th birthday on July 4, she added.

Police believe Som’s killer lives in the area and must have known she was home alone.

From the physical evidence at the scene it appears he forcibly entered the home with the intent of raping his victim, but stopped the assault when he realized she was menstruating.

Police believe that he then likely decided to kill her to cover up his crime, then ransacked the home in search of valuables.

Officers dusted the scene for fingerprints, which were clearly visible at the point of entry.