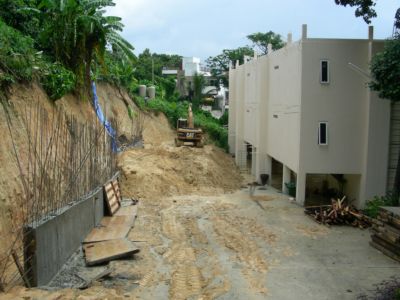 PATONG: Following heavy rains overnight, three Burmese laborers were crushed by a landslide this morning at the site of a new apartment block being built on 50 Pi Rd.

The laborers were part of a construction crew who had been working on building a retaining wall at the site, located opposite Rattana Hill Apartments, to prevent such an incident.

The owner of the apartment project, who declined to identify himself, told the Gazette; “It happened at about 11:30 am where we are building a two-meter concrete wall to prevent landslides.

“Actually, the laborers had been given the day off work, but still turned up at the site to pick something up,” he said.

“At first, only one laborer was caught in the slide. After the lower part of his body was trapped, he started shouting to two of his friends who were waiting nearby to come and help him.While his two friends were trying to pull him out, more land started to slide, burying all three of them alive,” he explained.

“Officers from the Department of Disaster Prevention and Mitigation tried to use a backhoe to dig them out. Unfortunately, it was too late. They had already died of suffocation,” he added.

Col Grissak told the Gazette; “We would like to warn people who are building on hills to please be careful. When there is hard rain, we often have problems like this due to the fact that this type of land holds water and does not drain easily.

“Maj Gen Apirak has repeated his call for Patong Municipality officers to check the entire area for risk areas where landslides might occur, especially in the vicinity of this accident,” he said.

“The third laborer has yet to be identified,” he said.

The Gazette questioned all those at the scene but was unable to find out how the apartment owner could know all the details of the accident without being there.

The owner himself when questioned further was reluctant to elaborate.

As he had only just arrived at the scene, Col Grissak said he had yet to learn the identity of the project owner.

“The police will investigate further to find out whether the apartment owner is at fault and to check whether or not the laborers were legally employed,” he said.