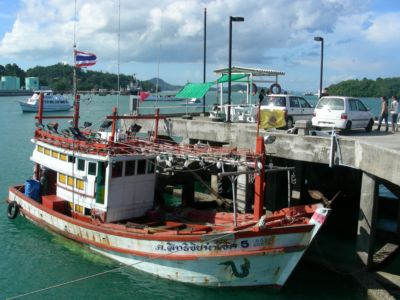 AO MAKHAM: Phuket Customs officers on July 10 arrested two men found on board a Thai-registered boat carrying 3,000 liters of illegal diesel off the coast of Satun.

He explained that undercover Customs agents had heard that the fishing boat Tor Sittichai Namchoke 5 had been converted into a floating gas station out at sea and had been modified with diesel tanks and a pump.

In 2002, Thailand starting coloring its marine diesel green in an effort to deter fuel smugglers. However, the fuel found on board Tor Sittichai Namchoke 5 was yellow, police said.

“The three tanks in the vessel could hold around 12,000 liters, but most of it had already been sold. About 3,000 liters was found in their tanks” K. Somchai said.

“They bought the fuel from a neighboring country, probably for less than 20 baht a liter, then used rubber pipes to move the fuel from boat to boat at sea” he said, adding that the gas, boat and pump had a combined value of about 682,000 baht.

Prasert Kaew la-ead, captain of the Tor Sittichai Namchoke 5, and his crewman were taken to Phuket City Police for further questioning. At the time of going to press, the Gazette had yet to confirm that the men have been charged.