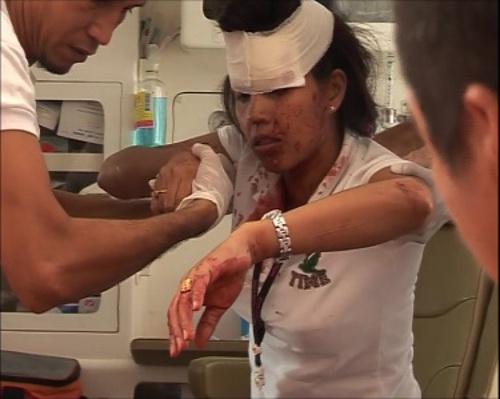 PHUKET: Two tourists and a tour guide travelling in a tour van that had its roof ripped off by a crane in Chalong yesterday are recovering in hospital, the Phuket Gazette has confirmed.

All nine occupants in the van at the time of the accident were taken to hospital, Chalong Police Sub Lt Kraisorn Boonprasob told the Gazette.

“A Russian woman and a Russian man, as well as the Thai tour guide, were all kept under observation at the hospital overnight,” a staffer at Phuket International Hospital confirmed this morning.

“They all have bruises to the body and are suffering back pain,” the staffer said.

“They have been asked to remain in the hospital until we run further tests to determine the extent of their injuries,” she added.

According to reports at the scene yesterday, the driver of the tour van suffered only minor injuries.

Sub Lt Kraisorn explained that he had yet to charge anyone over the incident.

“We have yet to question the driver of the van or the crane operator to determine in detail what exactly caused the crash,” he said.

Sub Lt Kraisorn declined to name any of the parties who may later be charged.