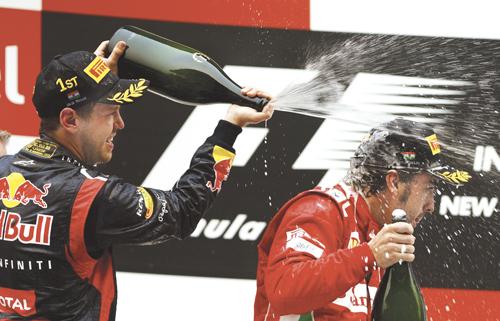 PHUKET: The F1 2012 season was the longest ever, and six World Champions took part; the most ever.

Pirelli advanced its ‘made to degrade’ rubber, and managing tyres became a critical driver attribute.

The first half of the season was perhaps the most exciting ever. We saw seven different winners in seven races, at the end of which Lewis Hamilton led by just 2 points. Then Fernando Alonso won twice, and Hamilton once. Alonso had a 34 point lead, but anyone could win.

Then McLaren won three races, and Sebastian Vettel took four races on the trot. Vettel was in the lead by 13 points. It had slipped into a dreadful predictability.

The season blazed back to life for the last three races. In Abu Dhabi, Kimi Räikkönen won for Lotus. Vettel’s lead dropped to 10 points over Alonso. The USA GP was sensational. Hamilton won, but Vettel took second with Alonso third, setting up a dramatic championship decider in Brazil. Jenson Button won the last race, but it was about Alonso and Vettel. Vettel scraped in with a 3 point win.

In Malaysia, a terrible pit-stop cost Hamilton the race. In China, they took second and third after Hamilton received a five-place penalty for a gearbox change.

Hamilton took his third pole in Spain, but was sent to the back of the grid for insufficient fuel. He won in Canada, but in the European, British and German GPs went out in collisions. He won in Hungary and Italy. In Belgium he went out in another collision, but Button took the win.

McLaren started and finished with the best cars on the track, but errors from the Immaculate Team cost them the season, and Hamilton.

Mark Webber won in Monaco and Britain, but it was Spain before Red Bull looked dominant, where an alternator failure cost Vettel victory.

Vettel lucked out in Singapore as Hamilton’s gearbox failed, then a technical upgrade enabled him to win in Japan, Korea and India.

McLaren fought back to top car, but by then Red Bull only needed to beat Ferrari.

Ferrari started with a substandard car and the best driver of 2012. Alonso stole an opportunistic win in Malaysia, and was in the top three. In Spain, Alonso became the first repeat winner. He won again in Germany, and his lead was 40 points after Hungary. But Ferrari’s development lagged. Red Bull’s didn’t.

When Ferrari lost in India, 2012 was all for Red Bull to lose.

In Bahrain, Canada and Hungary Lotus had the best car. Räikkönen should have hunted Vettel in Bahrain, and Grosjean would have won in Spain but for a faulty alternator. Finally the only Räikkönen
victory was Abu Dhabi.

Mercedes started well with Nico Rosberg’s win in China. He was strong in Bahrain, and finished second in Monaco. After that, Mercedes lagged in development, and never threatened again. Michael Schumacher’s abysmal season was relieved only by Spain.

Sauber produced a wonderful car. It prefers fast tracks, but is kind to tyres. In Malaysia and Italy, Sergio Perez came
second. Then he signed to join McLaren for 2013 and did nothing thereafter.

Kamui Kobayashi was unlucky to get only one podium finish. He has lost his seat for 2013 to Nico Hülkenberg.

Force India did well. Hülkenberg got the higher points because the team split strategies. Williams had their best car in years, with Spain giving Pastor Maldonado their first victory since 2004.

Toro Rosso looked promising, but did not deliver. Caterham and Marussia did not make progress. HRT is for sale.

Bernie Ecclestone is 82. In 2012 he remarried, was the subject of a UK tax enquiry and a German bribery case with knock-ons in the USA. His proposed F1 IPO was canceled. At the end of the season he had a row with Ferrari. Will Bernie ever retire?

The Digby will be available to discuss the 2012 season and next year’s over the festive period at the Green Man,Chalong. Click here for more information.