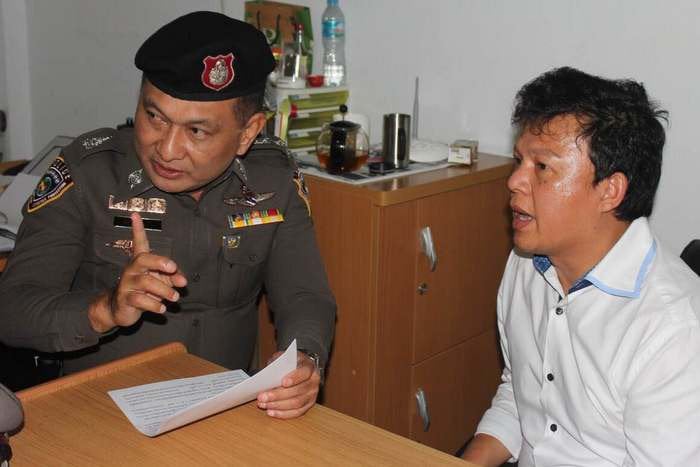 PHUKET: Three suspects have been apprehended in Phuket for their alleged involvement in the international 10-billion-baht UFUN pyramid-scheme.

During the raid police seized a Mercedes-Benz E 250 8 and an Audi A7, together worth more than 10 million baht.

Police tracked down Mr Natthinont after he submitted evidence to police in defence of the purchase and sale of luxury items, including the purchase of a Porsche from Mr Techasit, reported The Nation on June 2.

Police did not find the Porsche at the car shop in Rassada yesterday.

“Mr Natthinont admitted to police that the Mercedes-Benz belongs to Mr Techasit, and that he had his staff drive the car down from Phang Nga last week,” said Col Angkul.

“Mr Natthinont said that Mr Techasit told him to sell the car. We believe this car was obtained with money from the illegal pyramid scheme.”

Mr Natthinont claims the seized Audi belongs to a friend, who police have declined to name. His friend allegedly has a secondhand car shop in Bangkok, and had asked Mr Natthinont to sell the car.

“Though Mr Natthinont claims the Audi has nothing to do with the UFUN scheme, we seized it while we continue our investigation,” said Col Angkul.

Police have ordered ownership documents for all cars in Mr Natthinont’s shop to be presented as evidence to prove that they are not assets obtained through UFUN-derived funds.

Col Angkul explained that Mr Natthinont has been involved in the UFUN network in Phuket for more than two years, and has about 10 people below him in the pyramid.

Ms Koveena was also charged for tax evasion and expanding the pyramid network by recruiting members. She denied these charges as well, confirmed Maj Sura Chankaew of the CPPD.

“Mr Nitiwat told police he had no idea that the UFUN scheme was illegal, that he thought it was a normal marketing network, so he kept investing more money,” said Maj Sura.

Mr Nitiwat first invested 30,000 baht about a year ago and continued to invest more until recently, when he heard about the complaints against the company and stopped.

“I found it to be a very beneficial business. I made a lot of money,” he told police.

Both Mr Nitiwat and Ms Koveena have been taken to the CPPD Headquarters in Bangkok for further questioning.

Police revealed to the Phuket Gazette after the arrests yesterday that they are searching for 10 more people in Phuket who are believed to be involved in the illegal scheme.

About 134 people are at large throughout the country, Col Angkul said.

“We are now chasing all the UFUN investors who are on the run. We issued arrest warrants for 164 people. We have arrested 30 already,” Col Angkul said.

Police urged UFUN members to turn themselves in or face the harshest punishments for their crimes.

“Turn yourselves in to police before we find you,” Col Angkul said “We will seize all of the assets we believe you gained from being involved in the scheme, and you will face prison sentence of up to 10 years.”