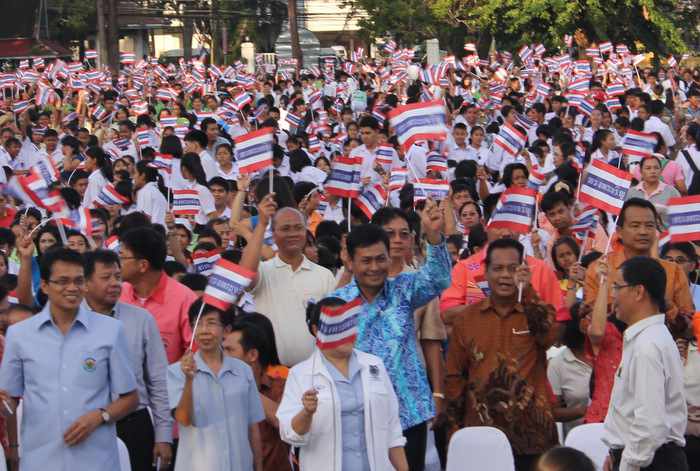 The concert, ordered by the National Council for Peace and Order (NCPO), was held in recognition of the United Nations’ International Day against Drug Abuse and Illicit Trafficking.

“We had 8,000 seats prepared at at the field, but that wasn’t enough. A lot of people who came had to stand throughout the event,” said Prajiad Aksornthammakul, Chief Administrative Officer of the Phuket Provincial Office.

“I am so proud to see so many people here,” he said from the stage. “We are one with Thailand, and we hope that everybody understands what the Army is intending to achieve.”

“Phuket people are very lucky to have such a good governor. He wants to transform Phuket into a haven free from drugs. I am sure that if everybody helps to keep an eye out for drug activity, it will not be long before there are no more drugs in our neighborhoods,” he said.

Amnuay Kumban, who long-served as a key co-ordinator for the People’s Democratic Reform Committee (PDRC) anti-government protesters in Phuket (story here), called for unity among those from all walks of life.

“We must unite all the people of Phuket – including government officials, residents and students – to work together to forge a better Phuket,” he said from the stage.

“Only by harmoniously working together can we return happiness to Thailand. We are Thai people, we know how to transform bad attitudes into positive thinking. We no longer have people of different-colored shirts from different groups. We are one Phuket.”

Entertainment on stage was provided by singing sailors from the Royal Thai Navy Third Area Command and students from many schools throughout Phuket.

Headline acts included Thai country music singer Ko Khai and Phuket singer Look Ked, who performed as a contestant in the national talent show The Star. Look Ked is the younger sister of Gam The Star (click here), who won the talent show in 2008 while finishing Year 12 at Satree Phuket School.

“It was hot because the event was held from 3pm to 9pm, but it wasn’t a problem. We love it. I have never seen such a big event with so many people,” one female student fro Satree Phuket School told the Phuket Gazette.

“We enjoyed the stage performances and learned more about how to help in the fight against drugs.”