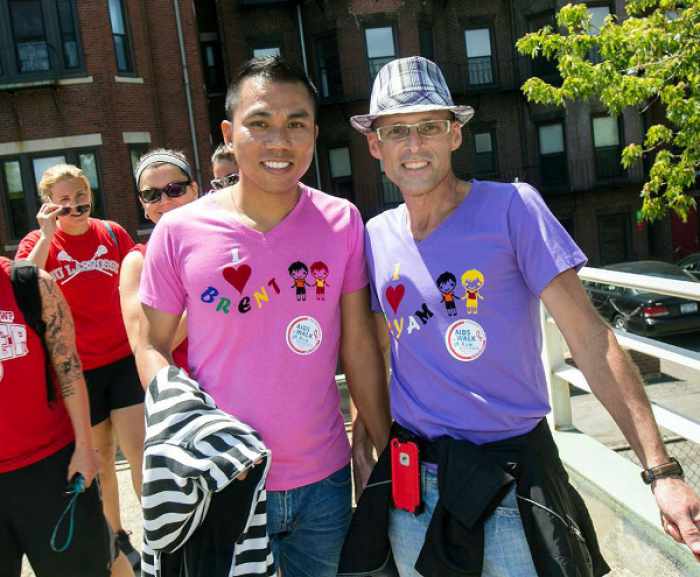 PHUKET: Former Phuket expat Brent William Otto, 45, and Sayam “Kob” Senamuen, 34, weathered a break-up, long separations and the trauma of cancer before reaching the altar last weekend. But the toughest obstacle of all was a US law that didn’t recognize gay marriage. The Phuket Gazette’s Leslie Porterfield reports.

The couple met at a pub in Silom while Brent was working in Bangkok. Kob was his waiter.

“A lot of guys working in gay bars are looking for boyfriends,” Brent said. “The thing that attracted me to Kob was that he was intent on serving his customers. He was a very good waiter.”

Brent was too shy to introduce himself, so a friend wrote his phone number on a piece of paper and passed it to Kob.

“Kob came over and handed the paper back,” Brent recalled. “He said, ‘I won’t call you, but if you want, you can call me.'”

They went out on their first date the next day, September 13, 2003, and quickly became a couple,
living together in Bangkok until they moved to Phuket in 2005.

On holiday in Thailand. Photo: Supplied

They worked together at a five-star resort, but kept their relationship secret because Brent was Kob’s manager. The stress of the secrecy ultimately led to a break-up, and Kob moved back to Bangkok.

They had no contact until Brent fell ill a few months later. When doctors in Phuket couldn’t diagnose the problem, Brent went to Bangkok for more tests. Kob was there to help him.

Diagnosed with cancer, Brent returned to the US for treatment.

The pair kept in touch, and by the end of 2008, with Brent’s cancer under control, he returned to Thailand. “Kob was at the airport to meet me, and we’ve been together ever since,” Brent said.

The pair found work in Rayong, but when Brent’s cancer returned in 2010, it was clear he would have to live in the US from then on. The question became: How could Kob live there with him?

They could legally marry in Brent’s own state of Massachusetts, which had been the first of 19 states to legalize gay marriage, in 2004. But they had to get Kob into the country to do that.

It wasn’t possible for Kob to get a fiance visa while DOMA was in effect. Photo: Brent W Otto

A fiance visa, the logical option, was out of the question, because though states could interpret marriage as they wished, at the national level, it had been defined by the Defense of Marriage Act (DOMA) since 1996 as the union between one man and one woman. The act denied federal-level benefits to gay couples, which meant no visas for gay fiances.

“So many people said, ‘But you’re in Massachusetts, you can get married,'” Brent recalled.
“But that didn’t mean anything federally.”

He was denied. Brent believes that the reasons were financial. “In the letter of denial, it said we had not proven sufficient social, familial or economic ties to Thailand,” Brent said. “Of course Kob had plenty of social and family ties, but no money in the bank. If he had a ton of money in the bank, it would not have been an issue.”

At that point, Brent was receiving chemotherapy every two weeks and thought Kob might qualify to be admitted under a visa exemption called humanitarian parole.

The US Citizenship and Immigration Services (USCIS) says that “Humanitarian parole is used sparingly to bring someone who is otherwise inadmissible into the United States for a temporary period of time due to a compelling emergency.”

They applied, Brent’s doctor included a letter of support, and an official with the nonprofit organization Immigration Equality later told Brent that it was a “phenomenal application” and couldn’t be improved on.

By then, Brent had already taken one of the couple’s six dogs back to the US. “It’s a lot easier to bring a dog here than a person,” he said. “I joked with Kob that if we were denied, I would get him a dog suit and a big kennel, and he’d fly here as a dog.”

Kob was denied the humanitarian parole.

They had exhausted all legal avenues. There was nothing to do but wait and hope that DOMA would be overturned.

A year and a half later, in December 2012, the US Supreme Court agreed to hear a case against DOMA, and on June 26 the next year, in a landmark ruling, the justices handed down their decision: Denying federal benefits to same-sex couples was unconstitutional.

The next day, Brent sent Kob’s application for a fiance visa by overnight express.

It would be six months before they learned whether Kob had been approved, and both Kob and Brent said the long wait was the most difficult part of the process.

“I called and couldn’t get any information… it was down to the deadline,” Brent said.

The USCIS approved Kob’s application. He made an appointment for a visa interview at the embassy in Bangkok on February 25 and Brent flew over to join him.

“I had heard that one question they would ask was, ‘What color underwear was he wearing the first time you slept together?'” Brent said, laughing. “As though we could remember that!”

The romantic requirements for a fiance visa are relatively simple: the couple must have a relationship at least two years long, and they must have met once.

But after all they’d been through, Brent wasn’t taking any chances. “I included everything in the application – a packet of 10 years of photos, 200 pages of Skype records showing we’d talked two to three times a day for three years… I didn’t want any question whatsoever about whether we have a relationship.”

Their experience at the embassy was nerve-wracking. “I was not allowed to go in to the interview with Kob. Lawyers can go in, but not partners,” Brent said. “Kob’s English is very good, but there are a lot of things he doesn’t understand.”

When Kob emerged from the interview, he was distraught.

“He said we were denied,” Brent recalled. “I said, ‘Wait a minute, stop, talk to me, what’s going on?'”
It turned out one document was missing – a letter from the Thai government saying Kob had never been married. The pair went immediately to the government office in Kob’s hometown to get the letter.

“We didn’t know we’d gotten the visa for sure until we picked up his passport on March 20. It was a long three weeks,” Brent said.

Five days later, the pair flew to the US together with two more dogs. They had 90 days to get married

The couple saying their vows in Massachus