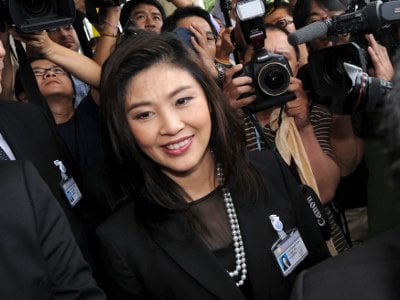 Among them is a Phuket connection, albeit tenuous and, most likely, coincidental.

Yingluck Shinawatra and Phuket Governor Tri Augkaradacha went to the same schools – and studied the same things. But although they are fellow alumni of those two universities, they are unlikely to have met at either. Our governor is 58 and our prime minister, 44.

That they both attended Chiangmai university and graduated with bachelor degrees from the Faculty of Political Science is not particularly striking. But their graduations from Kentucky State University in the United States, both with masters degrees in Public Administration, could be considered unusual for two Thais so many thousands of miles away from home.

And good on them for bringing great honor and fame to a university which is not necessarily iconic internationally, but which will now be gaining considerable stature in Thailand.

Here are some additional facts that have caught eyes at the Phuket Gazette:

Who would argue that there is not something faintly beguiling about Yingluck? Is it a charisma that might, for some, dampen harsh political issues? At least during her first few weeks in office? We hope so.

But after the honeymoon, observers in Phuket and most of southern Thailand are likely to become considerably more demanding as they focus on her ability to kindle growth and development – and to put out the fires.