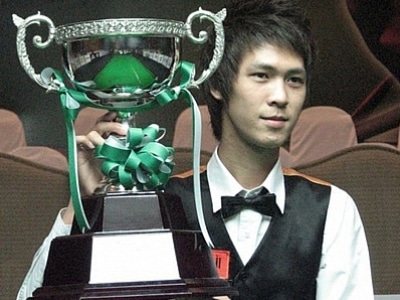 PHUKET: Thailand’s Thepchaiya Uh-nooh is the 2011 Sangsom Phuket Snooker Cup champion, having defeated the world number 17, Stuart Bingham, in a thrilling final this afternoon at the Royal Paradise Hotel, Patong.

Bingham was the only ranked player who remained in the tournament which saw Thanawat Thirapongpaiboon (82), Alfie Burden (57), Ratchapol Pu-Ob-Orm (67) and Issara Kachaiwong (87) all fail to reach the final.

Thepchaiya certainly had the advantage of home support and the knowledge that Bingham had just scraped through his last two rounds going into the championship match.

However, few expected the Thai player to extend his winning run to include the final, considering Bingham’s experience with longer matches and the final being the best of nine frames as opposed to the best of seven in previous rounds.

A combination of good snooker from Thepchaiya and a little complacency from Bingham handed three frames in a row to the Thai.

Requiring only one more frame for an upset, Thepchaiya portrayed few nerves and gave Bingham few opportunities to respond, winning the last frame, and the match by a score of 5 frames to 3.

The Phuket Gazette has been a proud sponsor of the Sangsom Phuket Snooker Cup and will continue to support future events.

Announcing PCs4Kids: Phuket’s new initiative to unlock the potential of the gifted poor