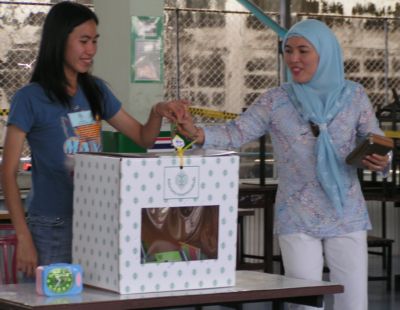 In third place was Cherdchai Wongseree, with 9,947 votes.

The results, posted on the Phuket Election Committee (PEC) board at Saphan Hin, will be announced officially only after Phuket Vice-Governor Tri Augkaradacha, in his capacity as PEC Director, presents the ballots to the Election Commission (EC) in Bangkok.

K. Thanyarat was elected to the Senate in April 2006 never took up the seat as the political crisis that year and subsequent military coup prevented the upper house from convening.

Phuket’s first female senator, K. Thanyarat is a former judge and well-known businesswoman. She and her husband Pamuke Achariyachai are major shareholders in the Kata Group of hotels.

Nationwide, there have been 34 complaints of electoral fraud received by the EC.

K. Prapun said 21 of the complaints were of vote-buying. In two cases, permanent officials were accused of failing to maintain neutrality.

Seven candidates were accused of intimidating opponents and one was accused of breaking campaign-sign rules, he said.

The number of complaints was low compared with more than 100 received in the general election, he said.

There have been no reports of complaints regarding the Phuket polling.