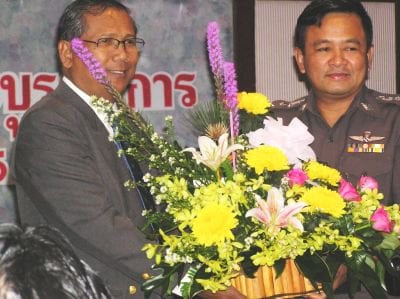 PHUKET CITY: Pol Col Chalit Thintanee, Superintendent of Kathu Police Station, yesterday received a bouquet of flowers to show appreciation for his arrest of a postman from Sakhon Nakhon who had stolen 29 million baht. The postal worker, Wirachai Gaiseeta, was in charge of the remittances section of the Sakhon Nakhon Post Office, and diverted money intended for remittances into his own bank account. After amassing sufficient funds, Wirachai apparently decided to take a vacation in Patong, where he was arrested. The presentation was made at the ST Hotel by Kusol Yamyune, Surat Thani-based Senior Director of Region 8 of the Thai Post & Telegraph Department. At the same meeting, Wirat Bunpetchkaew, the Patong Post Office Chief, was asked about progress toward arresting his own thieving post office manager, Prawit Prateep Na Thalang. He said that Prawit had been fired – not for theft from the mail, but for failing to turn up for work for 15 days. “Prawit was an employee of a state enterprise. He was fired because he did not come to work for 15 days,” he explained. On February 11, K. Wirat told the Gazette that Prawit was caught removing the contents from envelopes by a newly-installed security camera. Yesterday, however, he said, “[Prawit’s] crime was very minor because he took only five postcards which were not worth much. We arrested him and got the postcards back.” Prawit, after his “arrest”, walked out of the Post Office and has not been seen since. Meanwhile, steps have been taken to improve the dire performance of the Karon Post Office, K. Kusol told the Gazette. “Karon Post Office had a problem with delivering mail because there was too much work for the staff we had there, and employees were always quitting,” he explained. “Now we have hired more staff to deliver mail.”

No second runway “in near future’