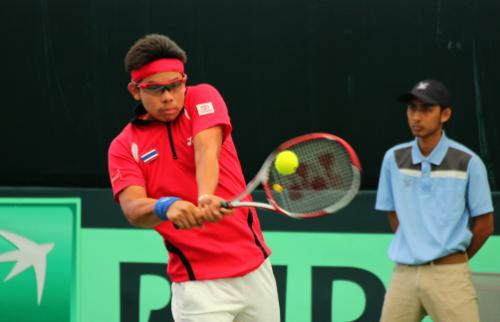 After an uncertain start (story here) which saw Thailand’s Warit Sornbutnark defeated in the opening match against Hong Kong’s Phillip King, the home team rallied to win the following four matches over the weekend to triumph with an impressive margin.

The three-day Davis Cup event was opened by the President of the Lawn Tennis Association of Thailand Suwat Liptapanlop and Phuket Governor Maitree Intusut who were welcomed by Thanyapura Founder Klaus Hebben and Thanyapura Executive Chairman Chris McCormack.

The BNP Paribas-sponsored event was moved from Bangkok to Phuket after Davis Cup organizers expressed concerns about the current political uncertainty. Thanyapura Phuket, offering the same surface used for the Australian Open Grand Slam tournament, proved to be the perfect solution.

“We were delighted with the opportunity to host this international event and I would like to congratulate Thailand on their success, and our team at Thanyapura for the seamless execution of a very important sporting occasion,” said Mr McCormack.

“Our tennis, swimming and triathlon academies offer world-class facilities, and we look forward to bringing more events of this stature to Phuket to put the Thanyapura Phuket destination firmly on the international map for sporting events and training camps.”

Next up for Thailand in the Davis Cup is a showdown with Kuwait from April 4-6.

In the other round two (region semi-finals), also to take place April 4-6, the Philippines will take on Pakistan.