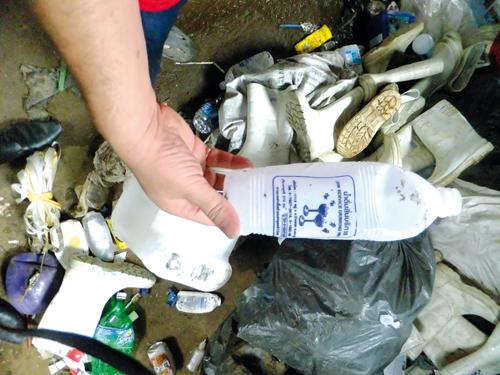 PHUKET: By some estimates, as much as 20 per cent of the island’s rubbish gets recycled. But this number could be higher if more consumers were made aware of a few things.

The island is home to dozens of small and medium scale scrap yard operations and recycling depots that make a living, if not a decent business, by buying back junk – old and new – from individual consumers as well as independent ma’ and pa’ collectors and brokers.

Despite this, so much trash, rubbish and junk that could – would and should – have been recycled never gets a chance, and is instead sentenced to the repugnant Saphan Hin landfill, where it will ultimately end up feeding the incinerator, burnt and broken down into detectable traces of various dangerous dioxins.

Located on Soi Tantalum off of Pracha Samaki Road in Rasada, just to the southwest of the new bus terminal, the Ruamset recycling plant is owned by Anuwat Maharach.

“Actually, we will accept all types of recyclable garbage – [except polystyrene food containers, the Gazette notes].”

Mr Anuwat explained that the rates his company pay for material vary and are subject to changes in the market.

Prices change everyday, according to the market.

“At our shop, we just collect, sort and pack it. Then, we send it to Bangkok, once a week.”

Mr Anuwat estimates that his center processes some 30 tons a week. This amount includes six to 10 tons of plastic.

Asked about any current challenges his company is facing, Mr Anuwat says, “At the moment, we are facing an employee shortage. We used to hire employees from Myanmar, but the situation has changed.

“They’ve mostly moved on to work more convenient jobs, as they have much more freedom since their country has opened up.

“This has had a big impact on us. If we don’t manage to sort and sell [recyclable items] in time, the market price could change, and sometimes we lose [money on what we buy].”

Asked if he had advice for consumers, Anuwat said: “When you bring the trash to us, please sort by type; keep Oishi [PET] or milk [HDPE] bottles [separate from] newspapers, brochures or steel. We don’t like organic garbage. It makes our warehouse smell.”

To get to Phuket Ruamset from Thepkrasattri road, turn onto Pracha Samaki road (The three way junction for Pracha Samaki road is marked by a set of traffic lights, just south of the main Supercheap shopping center and new bus terminal; the Phuket Provincial Electricity Authority power substation is on the corner of this junction). Head west on Pracha Samaki road for a kilometer or so, and at the fork in the road, marked by a blue sign, turn left. Ruam Set is on the left hand side, opposite Chalong Concrete. For more information, call 076-352 070 or 081-895 2099.

Nithi Ruktaetrakul, branch manager told the Gazette: “We accept all types of plastic, even if they are not marked.”

However, like Phuket Ruamset, the depot will not accept used polystyrene food containers, and the Gazette is not aware of any place in Phuket who will.

“Since we have too many customers everyday, depending on the time and season, we have a high volume going in and out, so it’s difficult to track down exactly how much plastic we recycle.

“Overall, for all types of garbage, we process between 20 to 30 tons per day.

“There are so many categories of garbage, but in Thailand, we try to make it easy for people to understand.

“For plastic, we generally use two categories – high and low density weights, or plastic which either sinks or floats in water.”

Beyond this, the plastic is also categorized based on common brand associations.

The firm readily accepts PET plastic bottles, paying out between 11-13 baht per kilogram for Oishi green tea and Listerine mouthwash bottles, or any bottle marked with number 1 inside a recycle triangle on the bottom of the bottle.

However, in the case of some low quality plastics from China or Brazil, for example, the number is not shown, but the firm will still accept these and use a float test to determine its density, and thus price.

He clarified that high density plastics are commonly referred to as “Plastic Loy Nam” [literally, plastic that floats on water].

“If we’re unsure about what type of plastic it is, we’ll put a piece of it into water. If it floats, it fits into this [high density] category. This includes most shampoo bottles. We can pay between 5 to 8 baht per kilogram for this type.”

Low density plastic, known as “plastic krob jom nam” [literally, plastic that sinks], gets a price of around 1-6 baht per kilogram.

He added that another type of low-density plastic currently in high demand is the thin opaque bottles used to store cheap drinking water (the easily squeezable kind typically found in local mom and pop shops and costing 5 baht; see picture to right). He noted that although the retail value of such products was quite low, the recycle value is relatively higher, at around 18-20 baht per kilogram .

This is not necessarily the case for thicker, opaque plastic bottles, such as those used for popular half liter and liter bottles for popular milk products such as meiji [HDPE], for example, which get around 10-12 baht per kilogram.

Asked to give advice, Nithi Ruktaetrakul said, “Everyone in Phuket uses products, but they don’t know about how to properly manage trash, and aren’t aware of its value and that some of it can actually be sold to make money.

“When people throw their trash away, it will be burnt in the incinerator, resulting in dioxin pollution that affects the environment and the masses. People can help by sorting their garbage before they throw it out. Someone who knows the value of it will bring it to be recycled or sell it to make money.

“Also, people can help by reducing the volume of garbage they produce. Another thing is to separate organic garbage from recyclables before bringing it to us.

“If everyone brings it to us, and only deals with bigger recycling companies, it will affect smaller companies, or individuals who sell recyclables to make a living.

“I don’t want to impact them, so I advise that if you can find a local seller or small company, than sell or give your recyclables to them instead. The price will not be much different from us.”
— Steven Layne / Saran Mitrarat

Expose your biz through FC sponsorship