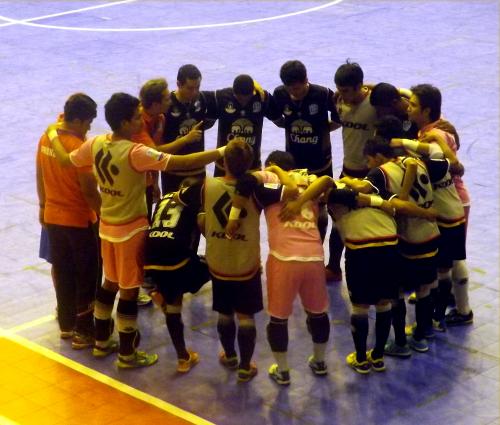 PHUKET: Five different Phuket United players scored the goals that contributed to the team’s away-victory (2-6) against Samut Songkhram on Sunday afternoon in Bangkok.

Phuket United’s goals were scored by Brazilian Jardel, who scored both of the team’s first-half goals on 15 and 19 minutes.

Four more Phuket goals came in the second half from Kitipong Sonsuwan (23); Nattapong Buachai (26); Piyapan Rattana (32) and the Pearl’s leading scorer “Action” Jackson Santos, who scored his 26th goal of the season on 31 minutes.

The result kept Samut Songkhram in 12th place with 23 points.

That match will be followed by a Southern showdown with 5th placed Surat Thani on Saturday, March 2.

Then, on Wednesday, March 6, they will host the current 13th placed team, Prachin FC, followed by another home match on Saturday, March 9 against 14th placed Samut Prakarn FC.

All four home matches will be played at the Saphan Hin Indoor Sports Complex with a 7pm kickoff.

Phuket’s other two matches include an away fixture against 4th placed Bangkok FC (March 13) and their final match is away to current last placed Highways Department on Saturday, March 30.

Other TFPL results this weekend