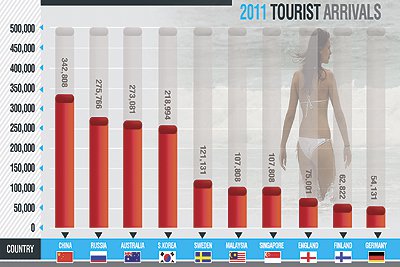 Mr Piya said he expects tourist arrivals to increase by 15% this year, despite a decline in arrivals from the island’s traditional tourist source markets in Western Europe, due to the economic and financial crises affecting outbound tourism.

He attributed Phuket’s rise in tourism to the growing Russian and Chinese tourist markets, which he said has seen on average, 30% annual growth over the past three years.

Mr Piya projected that there will be a total of 300,000 arrivals from each of these countries for all of 2012, and thus making them Phuket’s second and third largest tourist groups, respectively.

He added that the Australian tourist market is projected to yield about 500,000 tourists to Phuket.

Meanwhile, he projected average hotel occupancy for the year to be as much as 70%, with a 5% increase in room prices.

Particularly benefiting the Chinese market are large 3 and 4-star hotels located in Phuket Town and in beach towns, but not so close to the ocean, he said.

This is because such hotels are competitively priced and cater to a market who tend to prefer to go sight seeing instead of partaking in leisure activities out in the open sun.

He added that Russian tourists’ accommodation choices, in contrast, will range from two star apartments up to five star hotels, which are located closer to the beach.

Going on to speak about his own hotel, he said: “We’re satisfied with hotel operations… We expect the occupancy average for 2012 to be as high as 75%. We also expect the average room rate to surpass our initial objectives due to the fact that direct bookings, which didn’t come via agents, have increased. This, in addition to the fact that the style of our villas are popular among clients.”

In any case, Mr Piya said that the news of increased tourism may not be good across the board, pointing out that an increase in rooms will pose some new challenges.

Competition is rising with some 1,500 rooms being added to the market in the final quarter of the year, namely from projects such as the Holiday Inn Express, Patong, Pullman Phuket Arcadia Nai Thon Beach and the Regent Phuket at Cape Panwa, among others.

“In order to remain competitive, many hotels have been unable to raise their prices…”

Mr Piya went on to elaborate on his hotel’s strategy: “We aim to keep our prices steady, keeping to the standard – not reduce prices in order to lure clients from the competition… We’re trying [to target] the package market with high-potential clients, especially during low season. These include [packages for] marriage and reception ceremonies, seminars and Korean honeymooners who like to stay in villas.”

He said that, counting up to the end of this year, there will have been 33 couples holding their marriage ceremony at his hotel, which averages out to one marriage every 10 days. This is compared to only six couples in the previous year.

He added that most of the couples have been Australian.

Asked about challenges and problems facing Phuket tourism, Mr Piya identified congestion at Phuket airport as the most urgent, especially in the high season when charter flights increase by as much as 20 flights per day.

“By the end of this year, Phuket airport will have received more than nine million passengers, while its capacity is only 6.5 million passengers. There are planes taking off and landing on its runway every five minutes, and many airlines cannot find slots to touch down through to the middle of the night.

“In any case Phuket province is a resource for more than 10 per cent of the country’s revenue for international tourism. Thus, I believe the government will continue to support [tourism development and infrastructure investments.”

Phuket Finance: No fund is risk free… but