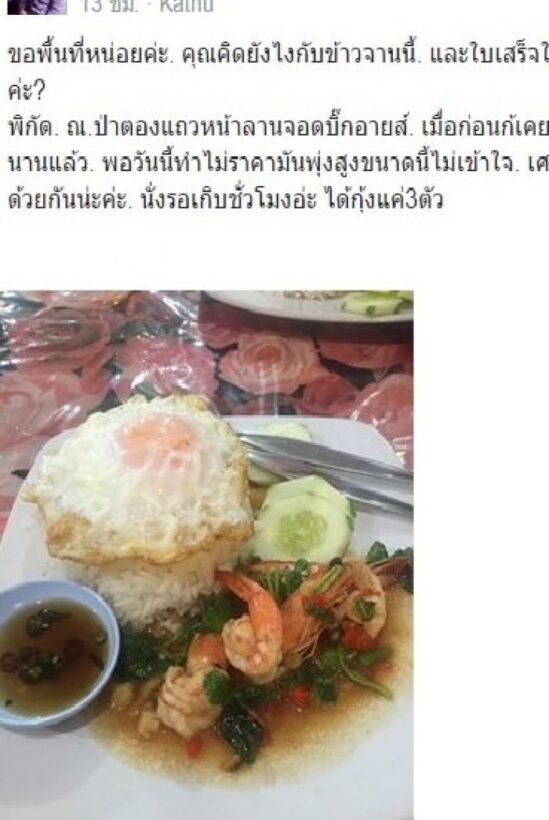 PHUKET: A Thai woman took to Facebook to release her anger early this morning by publicly complaining about a meal she had in Patong the previous evening that was, according to her, overpriced.

She ordered two Pad Kapaow Gung (stir-fried prawns with rice, basil leaves and eggs), one beer and one bottle of water and received a bill of 420 baht.

The post went online at about 12:40am and has amassed over 180 comments and about a thousand likes. She took pictures of the meal, the bill and the restaurant, then wrote: “What do you guys think of this bill and this dish? I was here not long ago and now the price is much higher. Sad, 150 baht for 3 prawns and I also had to wait one hour for it.”

A few Facebook users commented that it was, in fact, overpriced. A much larger number told her off by saying that she should read the menu before ordering, while some said that it’s up to the restaurant owners to decide how much they want to charge customers.

One user told her not to order an egg with the dish as it will make any dish expensive. This particular comment was followed by a 555 (hahaha).

Ratri Sommart, the owner of the concerned ‘Sri Peuak Restaurant’ explained to reporters what had really happened.

“The menu is in four different languages and easy to understand – I’m not overcharging. I took over this restaurant two months ago, so the prices may have changed since her last visit,” Ms Ratri said.

The user had initially shared a selfie on her personal Facebook page showing her middle finger while sitting at the restaurant on Tuesday at about 10:30pm. She did not share that picture on the public group this morning.