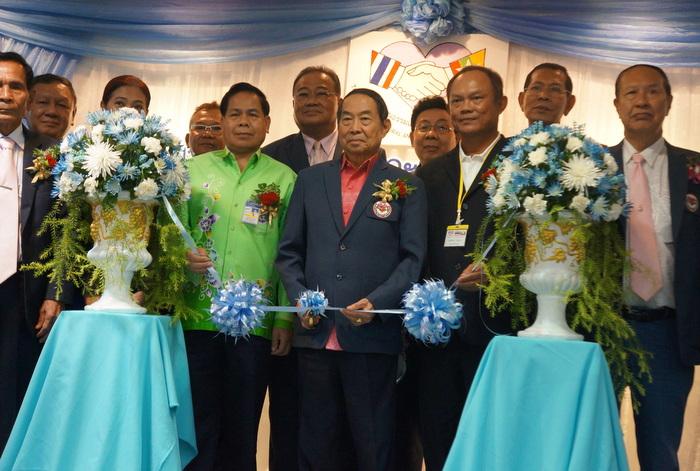 PHUKET: Before a crowd of around 100 Thai business people, General Chetta Thanajaro, a former commander in the Royal Thai Army, urged Thai’s to band together with bellicose rhetoric.

“Let’s drive our country forward,” Gen Chetta told the congregation at Boat Lagoon. “Our nation has been abandoned for too long. We, the Thai people, were fighting each other. I believe we can compete with any country in the world, but only if we stand together. It’s time to rise up and use our power and knowledge.”

The general addressed the crowd at the establishment of a new branch of the Thai-Myanmar Cultural and Economic Cooperation Association (TMCECA) on the island yesterday.

The meeting comes as a mobile TMCECA convoy conducts a cross-country trip, moving to Phang Nga today, before taking business interests’ concerns to the government.

“There are a lot of business industries in Myanmar that we’re interested in, like cement and power plants and hotels. Our members are following the government road map laid out by the Prime Minister and have discussed our plans with authorities in Myanmar,” said Gen Athichat.

“We have built good connections with their local government in terms of our business connections.”

“Myanmar authorities have also visited our local business, including pig and chicken farms and cement plants. Our organization aims to help businessmen coordinate with governments in both countries, in order to promote economic cohesion,” said Gen Athichat.

“Phuket is developing rapidly. That includes both our business investments and cultural attractions. We are promoting both tourism, culture, as well as our technology sector, since Phuket has been named a national model for the ‘smart city’ program,” said V/Gov Prajiad.

“The underpass construction underway now will push Phuket to another level, allowing us to welcome millions of tourists from around the world,” V/Gov Prajiad said. “Above all, we have reclaimed Phuket’s natural beauty; now our beaches are clean and beautiful.”

“We are excited to have this meeting, in order to exchange information and get to know each other in order to expand our businesses to our neighbors,” he added.

“Although Phuket is not directly connected to Myanmar like other branches of the TMCECA, this is a great opportunity for Phuket businesses to join the association and gain information about investing in Myanmar,” said Mr Surin.

“Phuket businessmen in seafood, the restaurant and hotel industries are interested in investing there, but unsure how to. We are the ones that can facilitate that trade. I coordinate and pass on their concerns to the experts in the association,” Mr Surin said..

Dr Surin is also a founder and president of the Phuket Anti-Corruption Network, which submitted a proposal for a 10-billion-baht digital real estate project last year (story here).