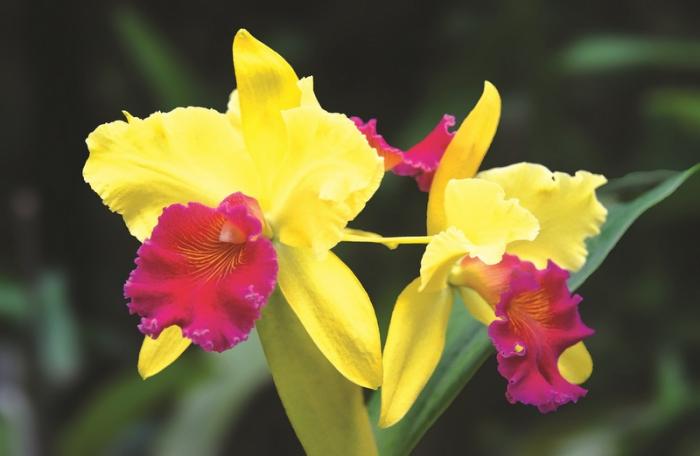 ‘No Orchids For Miss Blandish’, a raunchy 1939 novel, invoked orchids in its title because author James Hadley Chase knew they possessed all the right credentials.

Thus Victorians were offended by the blatant sexuality of orchids. Ruskin called them ‘prurient apparitions’ while artist Georgia O’Keefe has frequently in her paintings depicted them as veiled representations of female genitalia. And it doesn’t stop there. The word comes from the Greek for testicle – a reference to the plant’s pseudobulbs – while the flowers emit chemicals (pheromones) to dupe insect pollinators into thinking they are mating with a female.

End of diversion. Previously, we soberly considered two varieties of orchid: phalaenopsis and dendrobium. There are many more though, for this is the largest family of flowering plants, with total species numbers around 25,000.

In the dense jungles of New Guinea and Sumatra, there are likely yet more undiscovered species. More cultivars constantly appear, as the orchid is the most widely hybridized of all plants.

Native to Central and South America, cattleya fits the general orchid mold. It is epiphytic. There are two basic types: two-leaved varieties, which produce clusters of smallish flowers at the top of the stem, and single-leaved ones, which beget fewer but substantially larger blooms; the prime target for cross- breeding.

Justifiably popular, these produce dramatic flowers in a bewildering range of colors ranging from deep magenta (‘Lucky Strike’) to pure white ‘Queen Sirikit’. A typical bloom has three sepals and three, usually broader petals. One petal is modified to form the characteristic lip, which is often in a different hue. Thus ‘Alma Kee’ is yellow with a startling red, frilly mouth. The flowers are fragrant and invariably last well: up to six weeks is normal.

Cattleyas need light to flourish but not full tropical sun. Morning light is especially appreciated, as is regular feeding with a liquid fertilizer. Re-potting should be done at least every two years, or when new growth reaches over the edge of the container.

Two other genera in the family of orchidaceae deserve a passing mention. Oncidium orchids, also epiphytic, have pseudobulbs which consist of double-leaved stems and sprays of showy, widely-spaced flowers, numbering up to a hundred, mostly in shades of brown or yellow. The sought-after ‘Dancing Dolls’ has long clusters of vivid yellow blooms.

Slipper orchids (paphiopedilum) were fashionable as house plants in my youth. Partly, I suspect, because they are terrestrial and grow – quite conventionally – in soil. Hailing from China and points south, they had a better chance of surviving in English drawing rooms.

Characteristically, they have leathery, often dramatically mottled leaves and flowers. The predominant color is white or cream with deep purple flecking. In the tropics, they need to be placed in a relatively cool and partly shaded location. Protect from tropical storms, and replace the potting mix at least once a year.