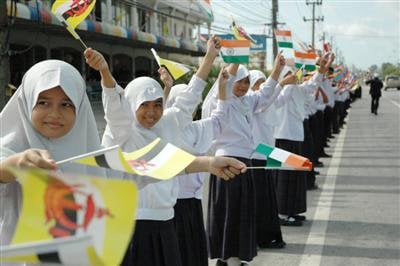 MAI KHAO, PHUKET: Thai Prime Minister Abhisit Vejjajiva and his entourage arrived in Phuket this morning for the 42nd Asean Ministerial Meeting (AMM) and related meetings that got underway at the Laguna Phuket resort on Friday.

From the airport to Cherng Talay, PM Abhisit’s motorcade traveled along the new airport road and Thepkrasattri Road, both of which were lined with about 2,000 flag-waving students.

Security was tight at the airport and there were numerous security checkpoints along the route.

In addition to an estimated 10,000 military staff and many more police officials, Governor Wichai has also established special volunteer security teams using locals to serve as ‘pineapple eyes’ and report any suspicious behavior or any potential protests to authorities.

Hotels have also been asked to submit lists naming their guests as part of the heightened security measures.

Security officers at the Sheraton Grande Laguna Phuket are equipped with metal detectors and sniffer dogs are inspecting arriving vehicles and personnel to ensure no explosives enter the grounds.

PM Abhisit officially opened the 42nd AMM with an opening statement at 9.45am, as scheduled.

The 10 Asean foreign ministers will now get down to the serious business of adopting a number of documents including a joint communique, terms of reference for establishing a regional human rights body and a master plan for maintaining Asean centrality.

Security will be heightened further when US Secretary of State Hillary Clinton arrives on Wednesday, Gen Patcharawat told the press earlier.