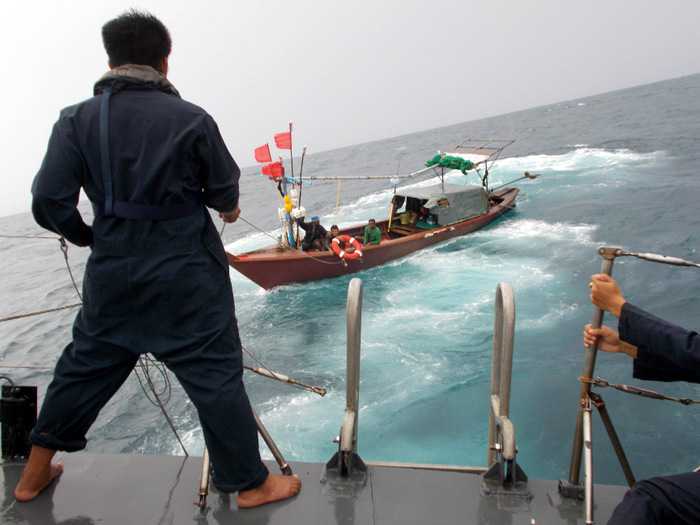 PHUKET: The Royal Thai Navy base in Phuket deployed the HTMS Chonburi to rescue six fishermen after their longtail boat engine stalled and their anchor rope broke in strong waves off Koh Mai Thon yesterday.

Lt Cdr Natthanai Lekjaikla, captain of the HTMS Chonburi, explained that the Navy was notified of the men’s predicament at about midday.

“We kept in contact with the men through mobile phone. After 40 minutes of searching, we found them about three nautical miles south of Koh Mai Thon,” he said.

“The weather made it tough. It was too dangerous to bring the Chonburi alongside the longtail, so we had to bring the fishermen on board one by one by, pulling them through the water by using a life preserver and a safety tether.”

The Chonburi returned to Cape Panwa with all six fishermen safely on board at about 3:45pm.

“They all went home after paramedics had checked their health and confirmed it was safe,” Lt Cdr Nattanai added.

Somsak Takimjit, 48, explained that he, along with his friends and nephews, rented the boat and set out from Ao Makham for an overnight fishing trip on Saturday.

“At about 10am on Sunday, the engine stalled. We kept trying, but we couldn’t get it started, so we dropped anchor,” he said.

The anchor line broke under the strain of the large waves, leaving the fishermen adrift in heavy seas.

“It was frightening,” Mr Somsak said. “The large waves kept hitting us and we were constantly bailing out water.

“We called a friend for help, but he said that the seas were too rough for the Marine Police to come, but he explained that they had notified the Navy to come and help us.

“We are very thankful to the officers. We are very lucky to be alive and safe.”