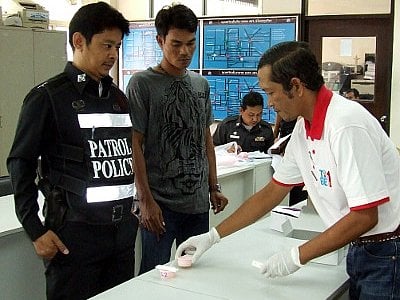 PHUKET: A strong majority of Phuket Gazette readers feel that the Phuket Provincial Police drug testing of all its officers is not effective in ensuring police are free of drugs, the results of a recent readers’ poll reveal.

Readers were asked to reply to the question:

The Phuket Provincial Police have announced that all officers under their command will be tested for ya bah (methamphetamine) by the end of [April]. The move is intended to assure the public that police themselves are not above the law, with officers who test positive to be “severely punished”. Do you think this is an effective measure?

In a breakdown by demographic, Thais taking part in the survey were by far the most pessimistic, with 80% answering “no” compared to just 9% who said “yes”.

In sharp contrast, 43% of tourists thought the testing would be effective compared to 20% who said it would not. The remainder said they didn’t know.

Most resident expats (64%) said they testing would not be effective, compared to 25% who thought it would.

To vote in the new poll, asking whether or not it is humane to keep dolphins in captivity, click here.