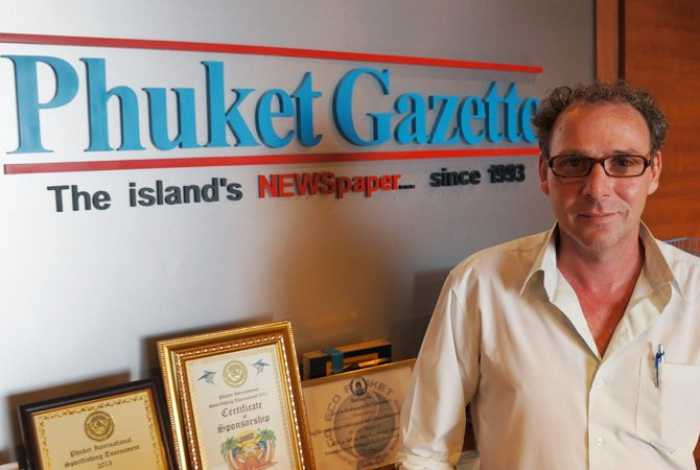 PHUKET: In an age where first reports of natural disasters come in through tweets and Facebook status updates it’s hard to imagine the vacuum of information after the Dec 26, 2004, tsunami.

First reports by the local English-language news agency the Phuket Gazette in Phuket, which quickly become the location of choice for international media coverage of the devastation, led with a “tidal surge” on the east coast rather than the giant waves that laid waste to many of the resort island’s west coast beach towns.

Phuket coast swamped after Sumatra earthquake was cobbled together by Deputy Managing Editor Chris Husted on Sunday – the one day in the week that the Gazette‘s office is closed. Managing Editor Alasdair Forbes, who was on holiday on the island at the time, quickly touched based, but decided to remain in the field to assist those in need.

Tremors, different from those that had been rattling Bangkok earlier that week, shook the island at about 8am. Mr Husted woke to a half-glass of water shaking on his bedside table.

“The first thing I got was a SMS text from Trevor Fisher saying: “Tsunami at Laguna”. That’s all it said,” Mr Husted said, recalling the morning nearly a decade later.

“And I didn’t understand it, was the short of it. I didn’t know if tsunami was a rock band, or what.”

It wasn’t until Gazette reporter Anongart “Yui” Sartpitsut called in, giving a hurried report of seawater rushing onto the east coast near Cape Panwa that Mr Husted took action – however, even after the team was assembled at the office and the first report was published, the word “tsunami” wasn’t used.

Mr Husted is unable to recall a trigger moment for when the magnitude of the situation hit the team. However, the responsibilities of a local news organisation to its readers and the rest of the world became very clear.

“One was just damage reports. No adjectives, you really don’t need them for something of this scale. Just the words reporting it, and you are praying that they are accurate…. What we did for the next four days, apart from that [delivering the news], was just functioning as a clearing-house for e-mails – contact information, people looking to find loved ones, loved ones who wanted to tell their families that they were okay – that was a big part of our job,” Mr Husted said.

Accuracy had become the sole goal for the team, Mr Husted explained. Eyewitness reports of piles of bodies collected but not yet counted would come in through informal lines but sticking with official numbers was essential.

“When information comes that fast and that incoherently, all you want are facts you can trust. At that stage all the world was looking for was accurate information. About 15 to 24 hours [after the incident] as we know – thank you to certain news agencies, I won’t name who they are – there was blurring of the great loss of humanity at Aceh with [what happened in] Phuket,” Mr Husted said. “And that was a source of contention that carried on for more than a year.”

CNN and other international news agencies flew in their own correspondents to brand the crisis.

“I think they were trying to figure out what Phuket was, and was it worth focusing on considering that the great calamity was truly in Indonesia. But Thailand is a much more marketable destination of horror to deliver to Western news screens,” Mr Husted said.

International news agencies’ reliance on stringers and local journalists has changed dramatically in the last decade. At that time, however, large news agencies relied on the information of their own on-the ground journalists, opening the door to misinformation.

Several journalists working on the island at the time recall watching foreign correspondents standing on the balcony of the cocktail lounge of the Novotel in Patong reporting the massive pile of rubble behind them as the devastation left behind from the tsunami. However, the construction site – a hotel demolished before the the tsunami struck – was actually being used by the Army, Navy and other teams as a dumping site for post-tsunami debris.

“If you weren’t local, you didn’t know that. At that stage those guys didn’t care. I’m laughing now, but it was tearful back then,” Mr Husted said, reflecting on a recent conversation about the incident with a fellow expat several months ago.

However, local knowledge and coverage had its limitations as well, Mr Husted admitted. International agencies were able to reveal the larger scope of the situation – beyond Phuket and Khao Lak – where the degree of the catastrophe was magnitudes greater.

“But the scale – people lose track of the scale. We knew our part in that calamity. Even though this place had suffered greatly, it wasn’t a blink compared to other places, and we knew that very quickly.”

Nonetheless, getting it right on the home front – ensuring accurate information that was relevant to the Gazette‘s reader base – was essential.

“One of the best tricks I learned out of that was asking the person who is not a trained reporter or journalist, ‘What do you see? Are you facing west? Turn to your right, what do you see? How far down the road?'” Mr Husted said, explaining how to deal with jumbled reports of those facing the direct results of the tsunami.

The pressure on the Gazette website forced the paper’s IT team to pull down every page that wasn’t critical to the situation. Again, the role of a local news agency diverged from that of an international organisation – supporting the level of traffic. Breaking news stories were sent to the Gazette‘s partnership publication The Nation and updates of essential information re-directed traffic from the Gazette website.

“What we needed to do was get that information that we knew was accurate and needed to be reported: What was happening where – even just status updates. Shut down the website, upload the story, reboot the website, so it could be flooded again.”

The next day the Gazette reported: Consular support for foreigners.

“The official tally for dead and missing in and around Phuket, as a result of yesterday’s tsunami now stands at 122 and 355 respectively, according to the Bureau of Emergency Medical Services System (Narenthorn Center) of the Ministry of Public Health…. The Narenthorn Center has set up a website, for people wishing to find details of relatives or friends. The username is: user. The password is: password,” the report read.

The call was for clothes, shoes, counselling, transportation, Muslim funerary cloth and supplies for coffins.

“ESP Construction Co has been asked to make, urgently, 500 wooden caskets of 60cm x 40cm x 200cm. Boats bringing the dead from Phi Phi Island and Khao Lak will be arriving in Phuket through the day, so many more caskets are likely to be required,” the report read.

While the world was reeling from what happened in South-East Asia, editors of the weekly local newspaper had a Tuesday deadline for print – and a responsibility to provide some sense of normalcy to those who survived, Mr Husted explained.

“We knew we had to have a page one that made sense, and it was beyond the tsunami by that time,” Mr Husted said.

Phuket students learn to save lives