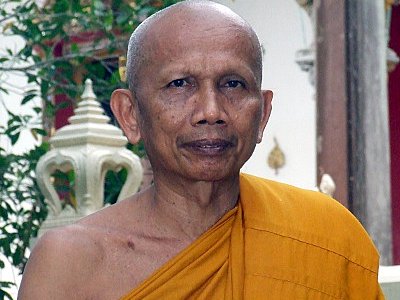 PHUKET: The gunfight at a temple in Surat Thani early this morning that claimed the lives of a local official and a five-year-old girl has sparked security concerns at temples in Phuket.

Mr Songwut was handing out awards to children that had performed in a talent show at the temple as part of celebrations to mark the beginning of Buddhist lent (Khao Phansa).

His assistants returned fire, sparking a shootout that left 11 wounded, including five-year-old Pornicha Thammasangwan, who died on her way to hospital.

In reaction to the tragedy, Abbot Phra Wisutthithammakhani, the highest-ranking abbot in Phuket, today voiced his concerns over the incident.

“Of course it’s not a good thing, regardless whether it happens in Thailand or anywhere else in the world. We have do our best to stop anything like this from happening again,” Abbot Phra Wisutthithammakhani told the Phuket Gazette.

“Normal people don’t do terrible things like this. [These are the actions of] only people who are mentally disturbed. Sadly, now this has happened, so we should check to make sure people do not carry weapons into temples,” said the 60-year-old abbot.

However, Abbot Phra Wisutthithammakhani held firm that the attack was an isolated incident that would not deter people from visiting temples.

“This will not stop people from going to temples. This type of thing is not happening across the country, so people will understand,” he said.

Chalong Police Superintendent Wichit Intorrasorn was exasperated by the attack.

“It was a terrible thing. As any Buddhist already knows, the temples are sanctuaries of life,” he said.

Chalong Police were forced to cope with a similar incident in 2009 when 37-year-old tour company boss Chalermpol Pranweerapaiboon was gunned down in broad daylight in the parking lot of Wat Luangpoo Supha on Makha Bucha Day, one of Buddhism’s holiest days of the year.

Since then, Chalong Police have provided security at temple fairs, but only at the request of temple organizing committees, Col Wichit explained.

“Right now we provide security at temple fairs only, but of course if any temple in our area requests our assistance we would be willing to help,” he said.

“At temple fairs, we often coordinate with different organizations, such as civil defense volunteers, local organizations and temple committees, like those at Wat Kata and Wat Karon, to protect against crime. This seems to work very well.

“Our officers stationed at temple entrances always seize some weapons from people entering temple grounds [to join the temple fair],” he said.

“Besides, whenever temples arrange events, we have our special police truck that we call the ‘Shelter for Tough Guys’, to lock them up in. If anyone makes a problem, they have the opportunity to stay in the truck,” he added.