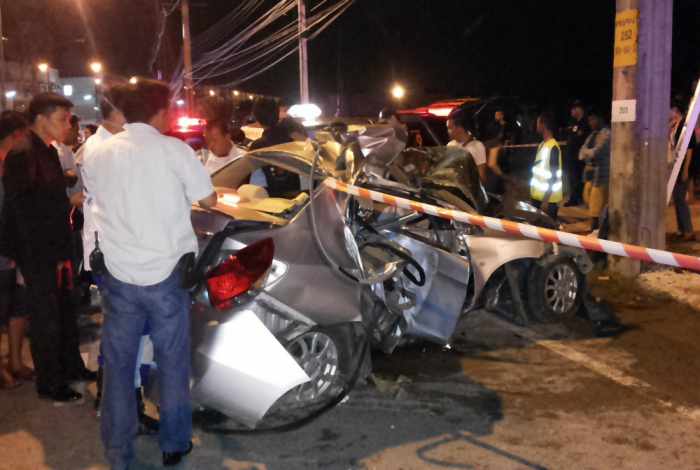 PHUKET: Three Phuket teenagers are dead and two more are in hospital after a high-speed crash in Thung Thong just before midnight last night.

The accident was the culmination of road fatalities that saw five dead in less than 24 hours on Phuket’s notorious roads.

Police and rescue workers from the Kusoldharm Foundation were called to the scene, on Phra Phuket Kaew Road, at about 11:50pm.

“The driver, Hassanee Wangtan, 18, from Cherng Talay, died at the scene,” said Capt Wittaya Sincharoen of the Thung Thong Police.

‘He was pinned behind the wheel. Rescue workers took 45 minutes to recover his body from the wreck.”

Passengers Supissara Boonmee, 16, and Sutthinee Thabtawee, 17, were pronounced dead on arrival at Vachira Phuket Hospital in Phuket Town at about 00:30am, an emergency room staffer confirmed to the Phuket Gazette.

“Miss Nassarin remains here at Vachira Hospital. She underwent an operation to mend broken bones at about 10am today,” said a surgical staffer at the hospital.

Chutarat Sae-Lim, a friend of the teenagers, told the Gazette that she and her friends were heading to Phuket Town to meet another friend when the accident occurred.

“I was driving my motorbike behind them. We had just left the [Bangchak] gas station when I saw the car hit the median, spin and then crash into the power pole,” she said.

A shop owner nearby said the Honda City car the teenagers were travelling in was moving at high speed when it spun out of control.

“The sound of the impact was very loud,” she said.

Three hours earlier, a man died instantly when the motorbike he was riding collided head-on with a passenger van on Rassada-nusorn Road, across town in Rassada.

“Witnesses said Mr Winai was heading east at high speed and crossed into the oncoming lane, into the path of a van heading toward him,” Col Chaliao said.

“He died instantly. His head hit the road and he was not wearing a helmet.”

Police have yet to decide whether or not to press charges against the van driver.

“He did not flee the scene, Col Chaliao said. “We have to investigate further before we decide whether or not to press any charges against him.”

Ms Sakon died instantly in the impact. She was not wearing a helmet.