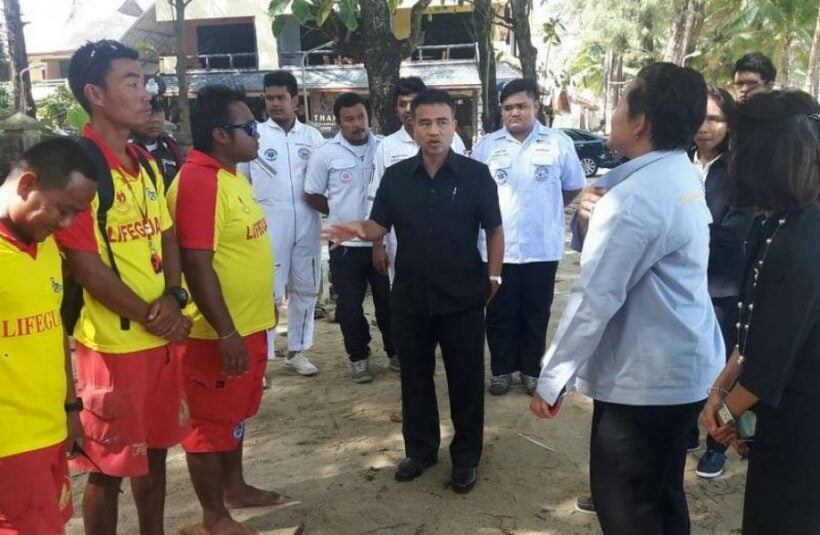 PHUKET: Another Chinese tourist drowned and four others were rescued at Phuket beaches in two days, prompting the Phuket Governor to urge officials to find better safety solutions for tourists.

The governor was present at the scene when the body of an 18-year-old Chinese tourist, Wei Peixin, washed up at Kamala Beach this morning after rescue workers were unable to locate him despite an hour-long search yesterday evening.

“Mr Wei had gone swimming in a red-flagged zone with two friends, He Xianyu and Zhao Shihao, both 18. His friends were rescued by lifeguards, but his body was not found until this morning,” Lt Col Somnuek Damkaew of Kamala Police told the Phuket Gazette.

Col Somnuek said that the three of them swam about 50 meters from shore before they were overtaken by strong waves. They were staying at the Rattana Hotel in Kamala.

An American couple was also rescued from the waves at Surin Beach this morning.

“Todd Michael, 31, and Kristina Elaine, 28, were rescued by lifeguards when they nearly drowned after entering the water in a red-flagged zone. Both were conscious and taken to Thalang Hospital,” said Lt Col Sompong Julriang of Cherngtalay Police.

A spate of drownings and near-drownings this week (story here and here) at Karon, Kamala, Patong and Surin beaches brings the death count from drownings to two within the span of a few days, while 10 others, mostly tourists, were rescued, with some sent to hospital and others not.