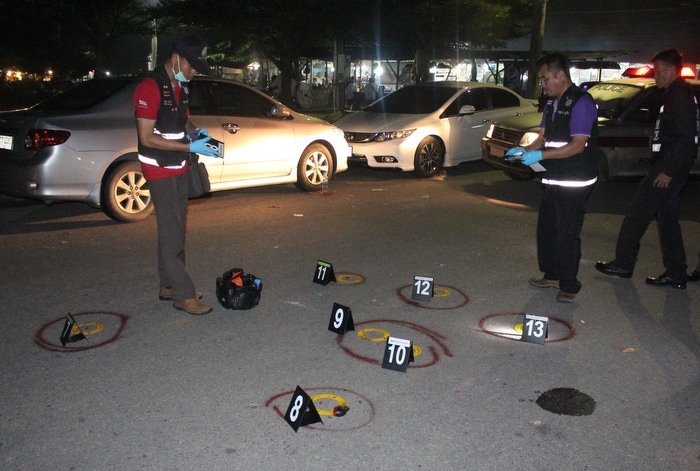 PHUKET: A teen was gunned down and three bystanders injured by stray bullets during the explosive final festivities of the Phuket Vegetarian Festival early this morning.

Thanakij Sawirum, 15, was shot dead behind the Lucky Complex, the abandoned building at the entrance to Saphan Hin, just after midnight, said Maj Pornthip Chumsri of the Phuket City Police.

The three boys who were injured by the stray bullets were named by police only as ‘Thaiyo’, ‘Pol Pol’ and ‘Phuri’. All are age 14.

“The three boys told us that they were just joining the final night of the festival and didn’t know the victim or the shooters,” Maj Pornthip said. “Their injuries were minor and they are safe now.”

As Mr Thanakij drove past the complex with a group of friends, they passed another group of about eight people, explained Mr Thanakij’s 17-year-old friend, named by police only as ‘Jack’.

“When they saw us, they started chasing us and shooting at us,” he said.

Mr Thanakij, who was riding pillion behind Mr Jack, was hit in the chest by one round of ammunition.

“I knew my friend was shot. I held him against my back for about 100 meters, but then he fell off the motorbike,” Mr Jack said. “I pulled over and ran off calling for help.”

Seven casings from the fired ammunition were found at the scene, confirmed Maj Pornthip.

A white car parked in the area sustained some damage from stray bullets, she noted.

“We will look into whether or not these two groups knew each other prior to the incident or if this was an act of random violence,” Maj Pornthip said. “We have already checked CCTV and will continue collecting evidence and tracking down the killers.”