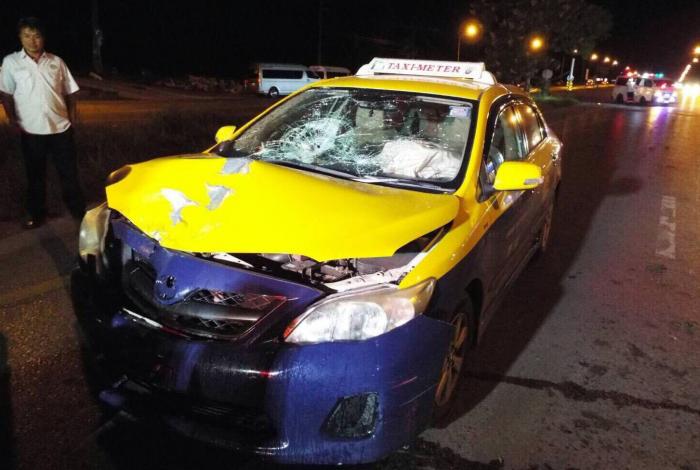 PHUKET: Another teenaged motorcyclist has been killed on Phuket’s roads today, this time in a bloody crash with an airport taxi while in a U-turn on the Bypass Road.

Maj Natthaya Suwannapong of Phuket City Police arrived with Kusoldharm Foundation rescue workers at the U-turn in front of the Ikea store. The taxi driver, Atiwara Samarnthong, 37, was waiting for police at the scene at about 1:15am.

“Mr Atiwara told us that he was taking two passengers to Patong from the airport when the boy turned into the road right in front of him. The taxi crashed into the bike, causing the teenager, hit by the windscreen, to fly out onto the road, ” said Maj Natthaya.

The victim, Krissada Junmanee, 18, and his motorbike lay about 20 meters away from the point of impact.

Police noted that he had not been wearing a helmet.

“The windscreen of the taxi was heavily damaged and splattered with blood; the airbags had been deployed; and the bumper and hood of the vehicle were also heavily damaged. The motorbike was also badly damaged,” confirmed Maj Natthaya.

Police are investigating CCTV footage to determine who was at fault. Mr Atiwara was taken to the police station for questioning but has not yet been charged.

One dead after “police chase’ in Phuket