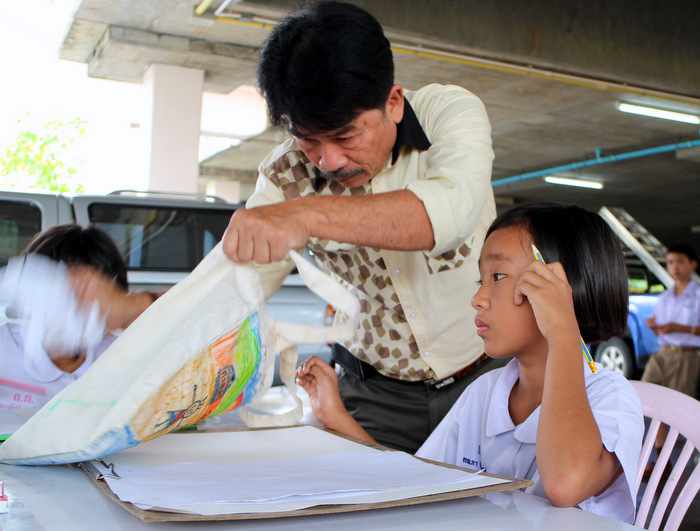 Taking part in a global initiative to increase awareness about environmental concerns, Phuket launched a three-day event to mark the United Nations Environmental Program (UNEP) global day, this year held under the banner: “Raise your voice, not the sea level.”

“I want everyone to realize the importance of protecting the environment, and the easy way to do this is to teach them while they’re young,” Governor Maitri told a gathering of officials at the opening of festivities at the Queen Sirikit Park in Phuket Town.

“We can already see evidence of climate change,” he warned. “Just this year, Phuket experienced such a lack of rainfall that people started running out of household water.”

Phuket recorded its lowest rainfall for the months January through March this year since records began 30 years ago (story here).

“If everyone realized that these problems can be prevented by saving the environment, even the weather could be improved,” the governor noted.

As part of the festivities, Gov Maitri cut a pink ribbon to clear the way for a truck loaded with hazardous waste to rumble all the way to Ayutthaya, where the unsafe materials will be destroyed.

The sendoff marked the launch of the island’s latest trash-separation initiative, under which hazardous waste, medical waste and general trash are to be collected separately (story here).

“Hazardous materials are to be collected separately from all other trash from many municipalities throughout Phuket,” said Dr Pornsri Suthanaruk, the Director of Regional Environmental Office 15 (REO15).

“The waste will be stored in an isolated environment at the municipal incinerator before being dispatched to Ayutthaya, where it will be disposed of in a special incinerator.”

No plastics or foam products are allowed at the event.

“People can even dispose of their hazardous waste, such as old batteries, at the fair and receive a gift,” Dr Pornsri said.

“Give us 12 small, used batteries, or six large ones, and get scented balm in return. It’s better than just throwing the batteries in the trash,” she said.

“Please come and enjoy the event. There are a lot of things here that can teach you about the environment.”

Krabi, Phang Nga next on list for curfew repeal