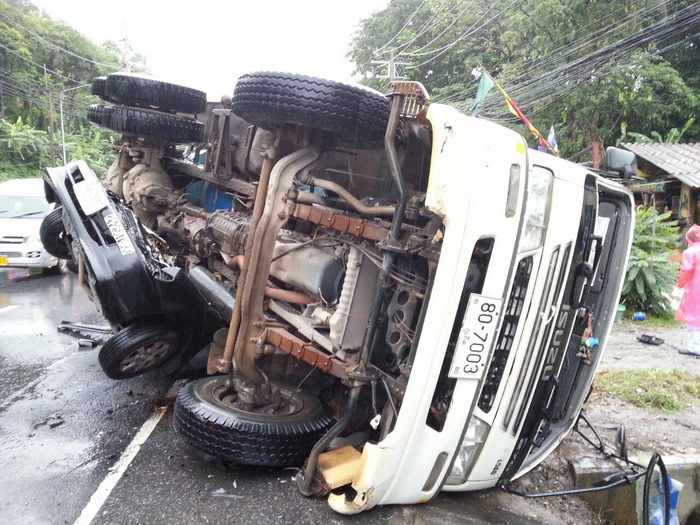 PHUKET: A Phuket expat from Switzerland was crushed to death yesterday afternoon when a cement truck slid out of control on Karon Hill and crushed his car.

“He was alone in the car when the accident happened,” he added.

Mr Wagner was on Patak Road, travelling toward Kata-Karon, when an oncoming cement truck swerved violently into his path, witnesses told police.

“The truck driver, Chart Junjit, 58, said that he was forced to slam on the brakes to avoid hitting a motorcycle that had pulled out in front of him. The motorcyclist was dodging a parked car,” Lt Weerayuth explained.

Witnesses reported that the truck slid out of control on the wet road.

The truck flipped onto Mr Wagner’s car, crushing it. The truck also struck the hood of a pick-up truck.

Police declined to name the pick-up truck driver, but named his passenger as Kanyanit Chocksawat, 41.

“The two suffered only minor injuries. Rescue workers took more than two hours to free them from the pick-up truck and to recover Mr Wagner’s body,” Lt Weerayuth said.

The driver and Ms Kanyanit, as well as Mr Wagner’s body, were taken to Vachira Phuket Hospital, he added.

Police are continuing their investigation into the accident.

“We will reveal further information when we have a clearer understanding of what happened,” Lt Weerayuth said.

“We are still calling witnesses in for their statements, and we have yet to finish questioning the driver of the pick-up truck.”