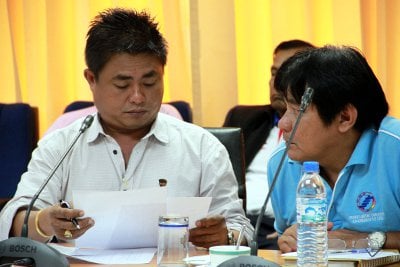 The news came at a meeting at the airport administrative office on Tuesday called by Phuket Airport Director Prathuang Sornkham.

Also present were representatives of Phuket Mai Khao Company and Phuket Car Service (PCS) Cooperative, which both hold concessions to provide taxi services at the airport.

Phuket Mai Khao applied to add 40 limousines to its current fleet of 110 vehicles, while PCS, which currently operates 150 taxis plus 30 vans, asked for permission to introduce 65 metered taxis to their fleet.

PCS also asked to have their own counter inside the terminal, which would be dedicated to offering PCS metered taxi services. That request was denied. If the request for the extra 65 metered taxis were approved, the vehicles would have to operate from the existing metered taxi counter already in operation at the airport, the PCS representative was told.

However, much of the expansion of the airport taxi fleet centered around the third operator present at the meeting: Mook Andaman Business & Travel Co-operative Ltd.

Mook Andaman currently – and openly – provides taxi services at the airport despite not having a signed concession with AOT to do so. Its fleet of 136 vehicles maintains a taxi rank on the street in front of the airport, which serves passengers exiting the terminal when there are not enough Phuket Mai Khao or PCS vehicles to cater to demand.

Looking to bring his drivers in from the “cold” – and more likely to avoid the legal consequences of operating an illegal service – Mook Andaman President Songtham Mekmanee presented a list of 60 drivers for the committee to consider including in the current concessions held by the PCS and Phuket Mai Khao co-operatives.

The list of 60, which included details of each driver’s vehicle, was presented after the transportation committee last week agreed to review a list of only 50 candidates, of whom 25 would join the Phuket Mai Khao fleet and the other 25 would join PCS.

The extra 10 names were added “just in case”, Mr Songtham told the committee on Tuesday.

However, Mai Khao OrBorTor President Sarawut Srisakhukham examined the list and found that most of names of the drivers provided were unfamiliar to him.

“I know every single taxi driver who lives in the [Mai Khao] area, and most of the people on this list are not from around here,” Mr Sarawut said, adding that local residents would be given preference in any expansion of the airport taxi fleet.

The list was handed back to Mr Songtham so he could revise it.

“Only local drivers can be on the list,” he was told.

That request has yet to be approved.

However, Airport Director Prathuang said that the committee would consider the request by the three operators and look further into its viability.

“We need to review the facts presented,” he said.

The Gazette understands that Mr Prathuang has been given discretion in resolving local grievances at the airport. However, the appeal to allow more airport taxis follows AOT Deputy Director Pratheep Wichittho announcing just last month a freeze in the number of taxis serving Phuket Airport until at least June next year.

Speaking at an inspection tour at the airport, Mr Pratheep explained that the freeze will remain in place while plans for the allocation of business and services under the 5.7-billion-baht expansion project at the key tourism portal are finalized.

“We have hired a consultancy company to research and come up with a model for commercial activities at all [AOT] regional airports,” he said.

Until that research project is completed, no more taxis will be added to the existing fleets, he added.

Blackout in Koh Kaew on November 20