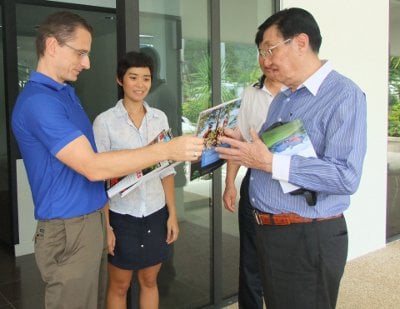 PHUKET: Thanyapura Sports and Leisure Club (TSLC) has signed a 2 million baht deal with China’s elite Liaoning Swimming Club, which means Olympians will train at Phuket’s TSLC’s Olympic-standard aquatic facilities for the first time under one of the world’s best coaches.

The deal sees the talented squad head to Thanyapura on January 27, 2013 for a six-week training stint with legendary coach Stephan Widmer.

Widmer recently left his post as head coach of the Queensland State Swimming Center to spend a year with his family in his native Switzerland. He will share his expertise and methods with a team of 23 swimmers and coaches from the Liaoning club at TSLC’s world-class campus, with 60 sessions scheduled over the six-week high-performance training camp.

The Aquatics Academy is the jewel in the crown of the TSLC megaplex. It includes a 50 meter Olympic-standard outdoor swimming pool, with electronic timing system, coaches’ observation window and a 600-seater shaded grandstand, plus state-of-the-art ozone filtration system and anti-turbulence lane ropes. There is also an adjacent 25m outdoor swimming pool with its own coaching platform.

Thanyapura President Robert Hauck said he was excited about the deal as it was a milestone on Thanyapura’s journey to become Asia’s favored training and retreat facility for elite teams from around the world in many sports and disciplines.

“This is a vital part of the vision becoming reality,” Mr Hauck said. “It was always envisioned that Thanyapura would become a training retreat or even a base for elite sports teams from all over the world.

“The Liaoning team is a powerhouse in China and looks set to become an even more formidable force after teaming up with a legendary coach like Stephan Widmer. So we are delighted to welcome the team here, and can’t wait to see them getting down to some hard work in the pool and having some fun times exploring our campus and the rest of Phuket too.”

Thanyapura Director of Aquatics Simon Jones described Mr Widmer as, “one of the world’s best swim coaches” and said he had been an admirer of his methods since Mr Widmer’s 1997 stint at the Queensland Academy of Sport in Australia.

“It’s very exciting for our Thanyapura-based swimmers and other athletes to see such an elite force in world swimming in their midst,” Mr Jones said.

“This visit will also be important in terms of word of mouth in the international swimming community and I’m confident the Chinese swimmers will only have good things to say about Thanyapura when they are attending the world’s top competitions and discussing training methods and facilities.”

Vice President and Head Coach of the Training Center of Sport Aquatics Management, Liaoning District; Coach Yuen Yue said: “Thanyapura is an amazing training destination with cutting edge facilities and services to assist us in optimizing our training performance. We never thought we would find a full scale world class sporting facility like this on a small island of Phuket, all set in paradise.”