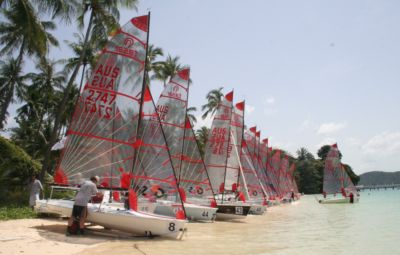 CAPE PANWA: Competitors in the G4S Tasar World Championships shoved off from Panwa Beach today for the first of seven days of racing in the first Tasar world championships held in Thailand.

Fifty-eight boats crewed by sailors from eight nations, including two Thai crews, are racing in the event.

The championship is being held off Cape Panwa, but results from the invitational race today will not be factored into the final scores. Racing in earnest begins tomorrow at 11 am.

Australians dominate the entry list, with 42 boats registered. Each 14-foot Tasar dinghy is crewed by two people, many of which are parent-sibling or husband-wife teams.

Among the Australians at the regatta is Frank Bethwaite, who designed and launched the first Tasar in 1975.

Fellow Australians and reigning world champions Rob Douglass and his daughter Nicole will be competing on their boat Chukkel.

They won the title at the Tasar world championships in Darwin, Australia, in 2005.

The regatta will continue until Wednesday, July 11, which will see the final day of racing followed by the awards presentation.