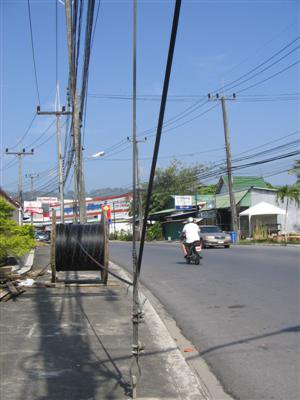 Starting at 8,600 baht per month, the long-awaited ‘Fiber To You’ service offers internet speeds of 10-20 megabits per second.

TOT President Varut Suvakorn said the state-owned company invested 200 million baht to install its ‘fiber to the x’ (FTTx) network in selected parts in each of Phuket’s three districts: Muang, Kathu and Thalang.

The service will connect to 3,200 ports initially, but can be expanded to 20,000 ports. Around 100 hotels and expats have already expressed interest in installing Fiber To You, Mr Varut said.

The venture will bring in annual revenues of 30-50 million baht with annual growth of 10%-20%, he estimates.

TOT plans to recoup its capital investment in three years and seven months.

Services offered will include high-speed Internet as well as other applications such as VOIP, Live TV and video on demand. Phuket’s large expat community is the major target group.

“Fiber [optic cables] can increase the service speed to more than 100 megabits per second. TOT will work on building knowledge among consumers about the difference in quality when compared to ADSL. IT and software businesses based in Phuket can take full advantage of the new service and be completely confident in its stability,” Mr Varut said.

Mr Varut said that the industrial estates of the Eastern Seaboard and cities including Hua Hin would be the next area for the rollout of Fiber To You services, with work starting in the first quarter of 2010.

TOT will market Fiber To You service directly and indirectly, by leasing network access to outside vendors.

To meet the increased bandwith requirements, TOT will expand its international gateway and rent additional bandwidth from CAT.

TOT currently has around 50,000 broadband internet customers in Phuket and hopes many of these will switch to the new fiber optic service.

Local computer guru Woody Leonhard, who attended the TOT launch party at Royal Phuket Marina on Sunday, was skeptical. Users in Patong, paying 10,000 baht a month for the service, were finding connection speeds ‘not very fast,’ with international connections typically around 3.5 megabits per second, a far cry from the 1 gigabit per second figure touted when work on the project began, he said.