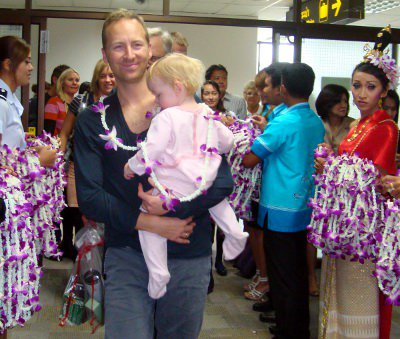 PHUKET: Thai Airways International (THAI) is still operating its full schedule of regular flights between Bangkok and Phuket – for now.

An officer from the ‘Enterprise Communication Department’ of THAI, asking not to be named, told the Phuket Gazette, “I have yet to receive any news about reductions in flights to Phuket.”

Her statement was in response to a report by Thai-language business daily Krungthep Turakij (KT) that yesterday said Thai Airways International (THAI) had cut more than 500 domestic and international flights due to the decreased number of passengers resulting from the country’s flood crisis.

“Perhaps Krungthep Turakij had an exclusive interview with Dr Piyasvasti Amranand, the President of THAI, who may have given that information to a reporter, but as far as I know, our current status still remains the same,” she said.

“As long as there is no official letter from management, I would confirm that all of our flights [to/from Phuket] are still operating as usual until we receive further notice,” she added.

According to the KT report, in addition to reducing the number of flights, THAI will also downsize the type of aircraft used on the routes to better suit the number of passengers, with consideration made on a day-by-day basis.

However, in a statement issued on October 30 on THAI’s Public Relations website, the airline said it will increase its seating capacity for flights flying to Phuket, Haad Yai and Krabi, in order to accommodate the number of Bangkok flood evacuees fleeing to Southern Thailand.

Also on that website, THAI reported 4.8 billion baht in losses during the first nine months of the year, attributing the losses to foreign-currency exchange depreciation and a 41.5% increase in the cost of jet fuel compared with the same period last year.

However, during the third quarter (July–September), THAI achieved a profit of 2.4 billion baht with total revenues equating to 49.9 billion baht, an increase of 10% year-on-year.

Mr Piyasvasti used the occasion to reassure the Belgian market that Thailand’s popular tourist destinations – including Phuket, Krabi, Chiang Mai and Chiang Rai – were unaffected by the floods.

He encouraged travelers to visit these destinations, which could be “conveniently reached” via Bangkok’s still fully operational Suvarnabhumi International Airport.

The THAI president admitted that travel advisories issued by many countries warning against travel to Thailand had quickly cut the number of tourists coming from China, Japan, South Korea, Singapore and some parts of Europe.

THAI’s passenger load dropped to 65.8% last month from 74% in the same month last year, he said.

Mr Piyasvasti said the Thai government must clarify and create understanding among other countries that the flooding situation has improved, and urge the countries to lift travel warnings.

“If we can do it fast, we still have hope that our tourism industry will return to normal by December,” he said.

Balls to Bangkok: From Phuket with Love