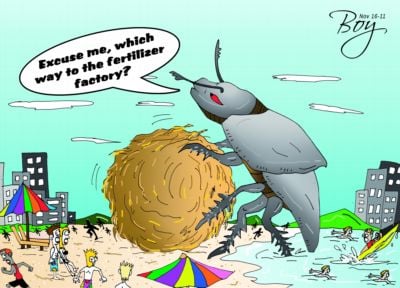 PHUKET: The plan by Patong Mayor Pian Keesin to install a fertilizer factory at the Patong Wastewater Treatment Plant must be heralded as good news. (See page 3, current issue of the Phuket Gazette. Digital subscribers click here to download the full newspaper.)

Just the week before Mayor Pian made his announcement, the Gazette received reports of yet another “chocolate plume” emanating offshore from the treatment plant and snaking its way toward Kalim.

This latest plume was just more evidence that municipal efforts are unable to keep pace with the growing strain on the wastewater infrastructure and the town’s sewerage system. Any preparations to provide effective relief must be welcomed.

The motion carried by Patong Municipality to apply for the 65 million baht in budget needed to build the facility indicates tacit recognition by the authorities that the current sewerage system is not good enough. Residents and tourists have recognized it for many years as the stink is irrepressible. But one would not expect local administrators at any holiday destination in the world to advertise that poop was making its way to the plage.

But the fact that Patong Municipality is finally facing up to the feces is encouraging and deserves our support.

Of course there is so much more that could be done. In the Gazette‘s ‘Your Phuket’ society pages last week we ran a photo of young students at HeadStart International School making “EM” (“effective microorganisms”) balls to send to Bangkok to help break down the level of harmful bacteria floating in the flood waters.

EM balls are not new to Phuket’s efforts to deal with waste. Some areas have been doing it for years. Patong could follow their lead, particularly in the wake of the extremely adverse, but well deserved, worldwide publicity given the fecal pollution found on the sand and in the surf at Kata and Karon beaches by a German television crew who filmed it earlier this year.

If the fragrance over Kata and Karon taught us anything, it was that while people understand how development can outpace infrastructure, they do not understand or forgive a government when nothing is done about it and those responsible lurk in silence. Only acknowledgment and action can stave off the shame.

As one Gazette reader recently suggested in our ‘Island View’ column, a nominal “environment tax” could be collected from tourists arriving at the airport. Even a painless levy of 50 baht could have raised close to 200 million baht in 2011, given the roughly four million tourists who will have arrived on our island by the end of the year. Surely an amount this size would suffice to undermine any cries of “no budget”.

Corruption? Possible, but as the author of Island View so valiantly suggests, tourists don’t much care about our social ills so long as these ills don’t directly affect them. Just a clean beach and a pleasant holiday will suffice to send them home with the type of experience we’d like them to tell their friends about.