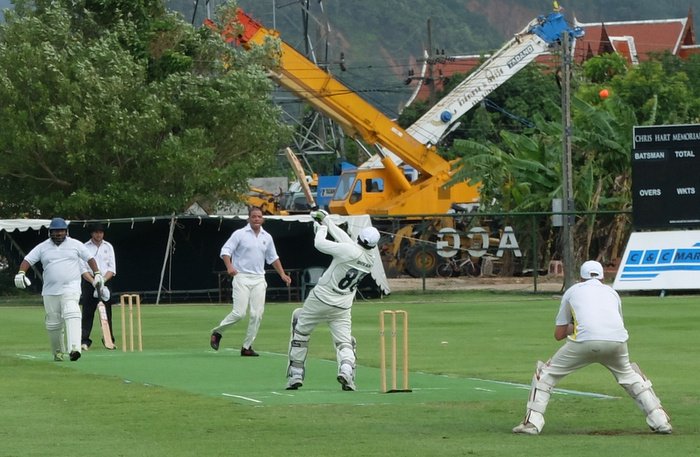 PHUKET: The Outrigger T20 cricket league commenced on Sunday at the Alan Cooke Ground with the Thalang Cricket Team (TCT) having an easy win over the newly formed Phuket Asian Cricket Team (PACT).

PACT won the toss and made the unusual decision to field first with their team only having seven players present. The new side, who is representing the Asian cricketers on the island, was not overly popular with the opposition after they turned up late for the toss and took to the field wearing bright orange cricket shirts, the same color as the PCG match balls.

The TCT batsmen found runs easy to come by against seven players and raced along to 2/51 from 5 overs and 4/93 at the 10 over break. Runs were evenly shared between the batsmen with Thai player Pao, 2/15, the only bowler to offer some resistance.

Rain delayed the start of PACT’s innings by 15 minutes, when the game resumed the pitch was damp and fluent stroke play was difficult.

Dipesh Badgal (23 runs) and Manish Sadarangani (22 runs) guided PACT to 50 runs in the 9th over before the loss of their first wicket.

TCT captain Simon Wetherell brought himself into the attack after the break and put the game out of reach with 3/4 from 2 overs. From that point PACT gave up the chase and played out the last 10 overs to finish on 4/90, 71 runs shy of the TCT total.

Phuket told to conserve power ahead of energy shortage