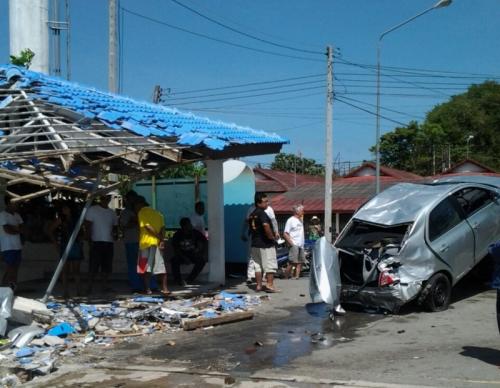 PHUKET: A Swiss visitor allegedly trying to avoid a police checkpoint in Chalong died early this morning after his car hit a shelter in Rawai, on Phuket’s south coast, flipped and landed in the sea below.

The 46-year-old was driving with a female companion when he hit the shelter at the sea gypsy village in Rawai.

“We got the report at about 5:20am,” said Chalong Police Deputy Superintendent Jumroon Plaiduang.

“We went to the scene and saw a Toyota Vios in the sea, about two meters from the shore. The bridge railing and the shelter on the road near the sea were damaged from the crash,” Lt Col Jumroon said

“The body of the man was still in the car. His female companion, who is from the Philippines, was sitting and crying on the shore,” he said. “She had been rescued by people who witnessed the accident.”

The woman, named by police only as “Ronalyn”, reportedly told Col Jumroon that the couple had been drinking all day and had gotten massages, then continued drinking into the night.

When they were ready to return to their hotel in Patong, they wanted to avoid a police checkpoint in Chalong, so they went through Rawai, she allegedly told police.

Witnesses said the car was going at high speed when it hit the shelter.