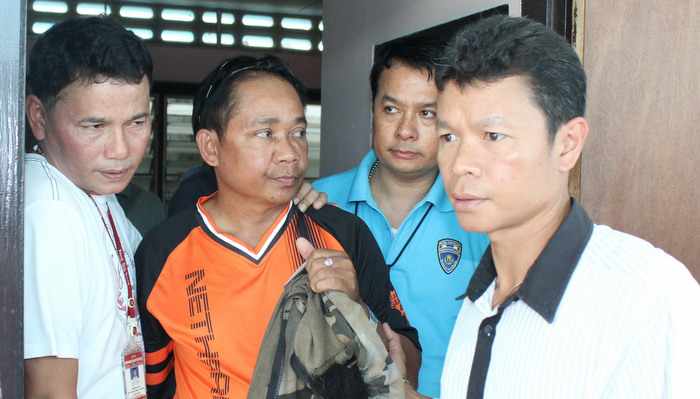 Sein Maung, 54, and Thein Thein Htwg, 35, were taken into police custody after preparing to give an abortion to a three-months-pregnant woman.

“We received a tip-off about the roaming abortion clinic, so we set up a mole to get the telephone information for Mr Sein,” Phuket Immigration Superintendent Sunchai Chokkajaykij told the Phuket Gazette this morning.

“The mole went to the 999 Hotel after confirming the appointment, which cost 12,000 baht. Our officers then waited outside, until we got the signal,” said Col Sunchai.

Police turned the drugs over to the Phuket Provincial Health Office to have them identified.

Mr Sein told police that he was a doctor in Myanmar and explained to them his abortion process.

“I first give the patient pain killers, then I inject a local anesthetic into her hip. Once that sets in, I insert a sharp piece of metal into her vagina and break the amniotic sac in the womb. Then, I stick the chicken feather in and spin it around to break the fetus apart and squeeze it out,” Mr Sein explained.

“The fee depends on the gestational period.”

Mr Sein and Ms Thein Thein were charged with illegally operating a medical service, dispensing medications without a licence and attempting to perform an abortion,” Col Sunchai said.

Police have urged anyone with information about illegal abortions in Phuket to report them immediately.

“Either call 1155 or go to your local police station. This is a very dangerous operation that could kill the patient,” Col Sunchai said (Special Report here).

Thailand’s coup given credit for taxi cartel crackdown in Phuket