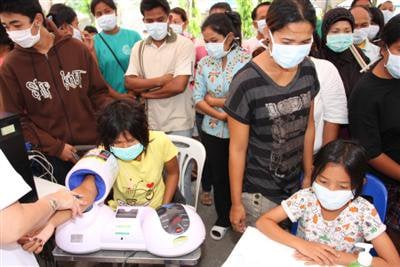 PHUKET CITY: There have been 77 confirmed cases of A(H1N1) infection in Phuket since the swine flu outbreak first hit the island in early June, the Gazette has learned.

Within hours of opening on Monday morning, the OSS center at Vachira Phuket had drawn between 400 to 500 people, none of whom tested positive for A(H1N1).

However, PPHO director Dr Pongsawas Ratanasang told the Gazette yesterday the number of confirmed cases on the island has reached 77, with one death.

Most of those infected have already been cured, he said.

The OSS at Vachira comprises six stations set up under large vinyl tents in front of the hospital.

People with flu symptoms, including high temperature, nasal discharge, coughing and sore throat, are greeted by staff upon arrival and given a thorough hand cleaning and surgical mask.

After that they register and have their blood pressure and temperature recorded by nurses before doctors give them the “rapid test” for the A(H1N1) virus that causes swine flu.

Those testing positive are quarantined for further testing, while those who are negative are, in most cases, given medication and sent home.

As with most trips to the hospital, the final stop is a visit to the cashier.

“We tried to set it up as fast as we could. We will operate the OSS until we can control the spread of swine flu. This is best approach as it keeps potential carriers in a special area where they cannot spread the disease to other patients,” he said.

Most patients are covered by social security or some other health insurance scheme, while others are charged at the normal price for such services, he said.

The OSS center at Vachira operates daily from 8.30am to 8pm.

Phuket abuzz with pride and wonder about ASEAN event