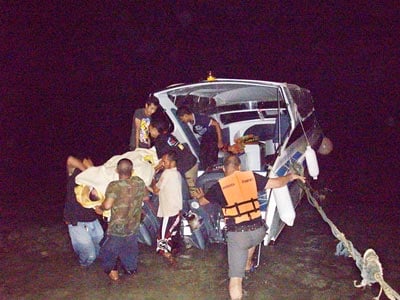 RAWAI, PHUKET: Chalong Police are investigating the case of a Swedish man found dead in his hotel room at a resort on Racha Yai Island in the early hours of Sunday morning.

Mr Viltfors’ body was discovered by police in his bed at the Ban Raya Resort and Spa.

Together with rescue workers from the Phuket Ruamjai Kupai Foundation, Chalong Police Superintendent Chinnarat Rittakananond went to the scene in a speedboat to recover Mr Viltfors’ remains and investigate the room.

Mr Viltfors was wearing a black shirt and black shorts at the time of his passing.

There was some foamy saliva coming from his mouth, but an initial police investigation did not uncover any evidence of fighting or foul play, either on Mr Viltfors’ body or in the room.

Swedish diplomatic staff have already been notified and are contacting the deceased’s family in Sweden.

Mr Viltfors’ body was sent to Vachira Phuket Hospital in Phuket City for further analysis and to await receipt by his next of kin.

Staff said Mr Viltfors checked in on November 24. When he came back to the resort after a day of diving he told the reception staff not to disturb him because he was tired and wanted to rest.

Police suspect the cause was either illness or suicide.

The Swedish Embassy was notified of Mr Viltfors’ passing on Sunday.