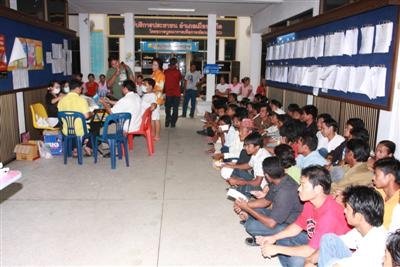 In the back of the truck, soldiers found two men and one woman, all Burmese, as well as a large amount of baggage belonging to the passengers.

Sen Sgt Maj Kasem admitted he and his colleague had picked up the workers in Ranong and were taking them to a rubber plantation in Chumphon.

Sen Sgt Maj Kasem said he knew it was wrong to use the police truck, but a friend had asked him to take the workers and he didn’t feel he could refuse.

A police inspection of the workers’ documents found all three had permission to work in Ranong, but were not allowed to leave the province.

The workers will be charged with leaving the province without permission, he added.

As the policemen were being arrested, many villagers came out to criticize them and complain about the police role in human smuggling.

With its growing real estate market, Phuket has been a destination for many Burmese workers, both registered and unregistered, in recent years.

The problem – and the alleged role of government officers in human smuggling rackets – reached the international spotlight when 54 unregistered Burmese on their way to construction sites in Phuket suffocated in the back of a refrigerated truck in April 2008.

One former Kathu Police officer, kicked off the force and known to have still been active in Burmese smuggling rackets, was shot dead outside his luxury home in Patong two months later.

Some have claimed he was linked to the tragedy in Ranong and that the execution-style murder was a silence killing.

Efforts by the Thai government to work with their Burmese counterparts to set up a ‘work visa’ program for migrant laborers have been greatly hindered by the fact that the military junta there does not recognize members of ethnic groups like ethnic Mon or Rohingya as Burmese citizens, even they they live in territory claimed by Burma.