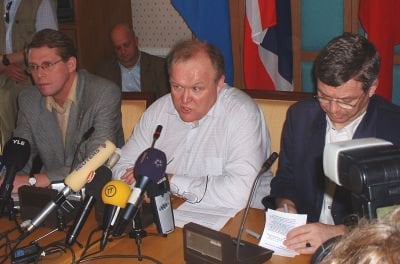 PHUKET: Swedish Prime Minister Goran Persson has called for an investigation into why no warning was issued in the hours before Thailand was hit by a tsunami that killed more than 5,000 people including, possibly, as many as 1,000 Swedes.

Speaking during a visit to Phuket with his counterparts from Norway and Finland, Kjell Magne Bondevik and Matti Vanhanen, Mr Persson said he had requested that the Thai authorities examine the circumstances surrounding the tsunami, and added that Thai Prime Minister Thaksin Shinawatra had “gone along with” the request.

Mr Persson said, “The investigation should ask, when it happened, what did the Thai authorities know? How was [the information] handled? Why wasn’t it distributed?

“There may be a good explanation, but there is a need for an explanation; so many people have died that it is a necessity.”

He continued, “It is important to say that many Europeans, including Swedes, want to come back to this wonderful country, but [their return] goes hand-in-hand with security and safety, and an investigation is part of that.”

Mr Persson added that lessons should be learned from the tragedy, giving building safety as an example. Someone, he said, should examine the reasons why some buildings were “completely eradicated” while others were left standing.

There have been reports that the search for bodies was winding down, but Mr Persson said he had been told this was not the case.

He said, “The Prime Minister has assured us that the search will continue … and he also said that if we ask the authorities to search in specific areas, they will support us in this.”

He stressed the importance of identifying bodies. “It’s in line with having as many [victims] as possible back home again, and having the possibility for those who lost their families, or part of their families, to make their farewells through a funeral,” he explained.

Mr Persson added that a joint Swedish-Norwegian consulate is to be established in Phuket, mainly to support the relatives of victims. He said, “Many people in Sweden and Norway willl want to come back here to have a time of reflection and mourning at the place where their loved ones died.”

Before coming to Phuket, the three prime ministers had stopped in Phang Nga, where they met PM Thaksin, Interior Minister Bhokin Bhalakula and the Minister of Natural Resource and Environment, Suwit Khunkitti, as well visiting Khao Lak and Wat Yan Yao, where thousands of bodies are being stored.

All three expressed their admiration for the forensic teams working to identify the deceased.

Norwegian Prime Minister Mr Bondevik told journalists that visiting the place where the corpses are being examined, “was like being on the doorstep of the realm of death”.

He added that Norway has donated a portable mortuary, due to arrive shortly.

Mr Bondevik joined the other prime ministers in expressing their condolences to Thais brereaved by the tsunami, and in thanking local people for their “generosity and compassion” in the immediate aftermath.

Interior Minister Bhokin gave journalists an insight into the magnitude of the task of recovering bodies.

“We’re still finding bodies every day,” he said, “Some have been found in the sea 200 miles from land, but we are continuing the search.”

K. Bhokin said that 1,900 unidentified corpses would soon be moved from Wat Yan Yao to Mai Khao centery in Phuket, where a centre would be established to identify them so they could be returned to their families.

He added that the Australian government has offered to pay for the repatriation of bodies of all foreigners, regardless of their nationality, but the Thai govenment would cover the cost of returning the bodies of Thai people to their loved ones.