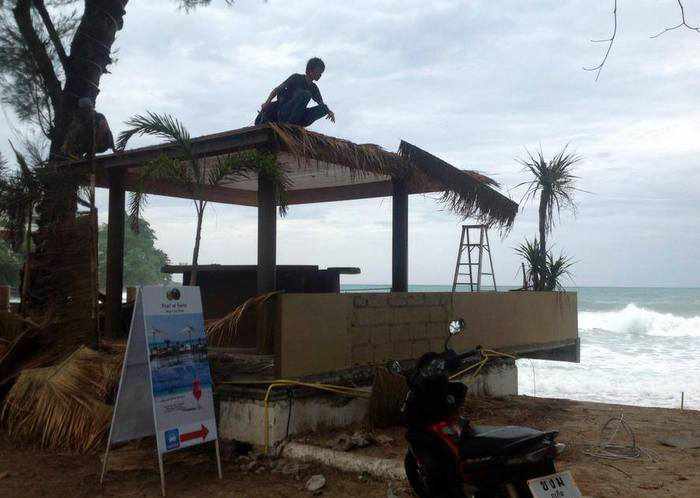 PHUKET: Surin Beach is a flurry of activity as businesses big and small seek to comply with the June 18 deadline to dismantle illegal structures on the beach.

The clear-out is part of an official crackdown on more than 100 businesses operating along the beachfronts at Surin, Bang Tao, Laypang and Layan beaches (story here).

Vendors who refuse to comply will have their premises torn down for them, Vice Governor Chamroen Tipayapongtada said last week, and could face hefty fines and jail time.

“The order is applied equally, whether the business is valued at more than 10 million baht or less than 1mn baht,” Mr Ma-ann said.

Businesses which have not started deconstruction by the deadline will face legal action, but lenience will be shown to those who can prove the need for more time, he said. However, any illegal building or part of a building still standing after the deadline will not be permitted to open for business.

“We have to follow the law,” said Mittipong Porjai, a member of the club’s operations department.

“But the soonest we can have our tent and other equipment, which we rent from a private company, taken away is June 22. We have already notified the Cherng Talay Tambon Administration Organization [OrBorTor] and promised not to open that section.”

Zazada Beach Club has also notified the OrBorTor that they need more time.

“Staff are moving whatever they can carry, but the building can’t be removed within the deadline as it is very sturdy. We’ve already hired a specialist to destroy it,” said Kantasit Charoensuk, assistant operations manager at the club.

“We will be losing a big selling point for us: the swimming pool and club on the beach.”

Mr Ma-ann acknowledged the burden on business owners: “I know that this destruction will mean a loss to the businesses. We will discuss what can be done about that after the deadline has passed,” he said.

All beach clubs contacted by the Gazette confirmed that parts of the clubs not encroaching on the beach are open as usual.